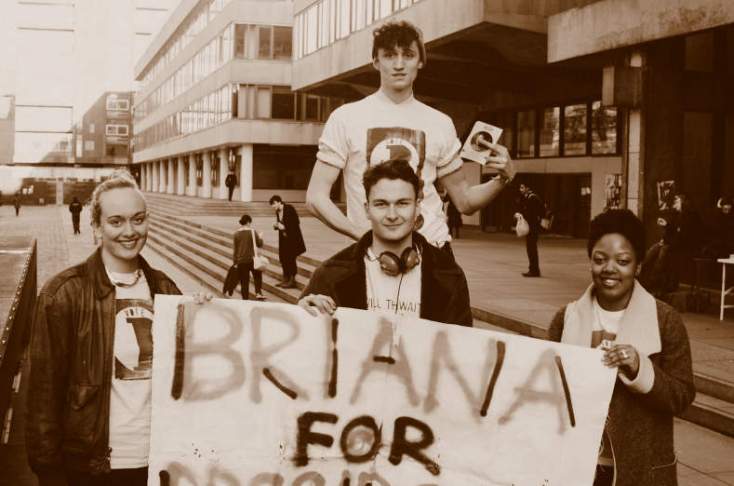 I’m the president of EUSA (Edinburgh University Students’ Association). I’m half African-American, half Angolan and I was born and raised in Washington, DC. I was lucky to grow up around a plethora of headstrong women. I never thought of gender. The examples in front of me reinforced the notion, that as a woman I could do anything when I grew up.

My grandmother was an English teacher at a local middle school and my mother started off her career in the Foreign Service. She eventually became Assistant Secretary and Director General of the Foreign Commercial Service at the Department of Commerce during the Clinton Administration. It was empowering to grow up around such impressive women. Little did I know how lucky I was to grow up in an environment where I didn’t bat an eyelid seeing a woman in a position of power. It was normal to me. 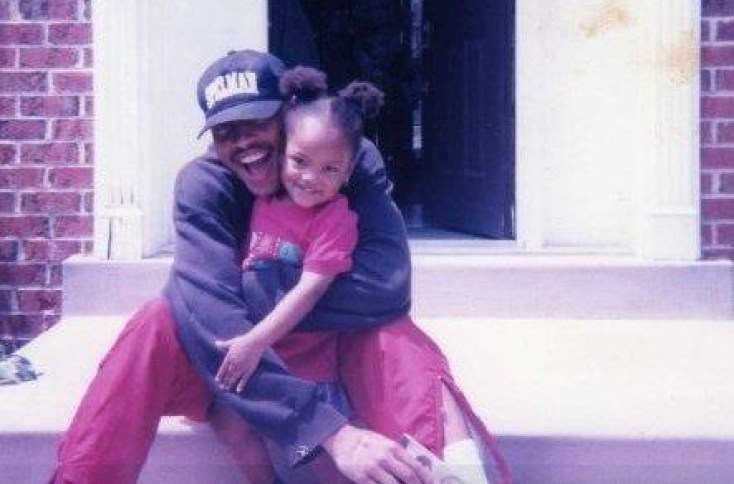 With my brother outside my house in Silver Spring, MD when I was 4 or 5.

In spite of this, DC disenchanted and disempowered me. The self-absorbed nature of American politics lay at my doorstep and I soon became very cynical about political change and processes. I felt that having so much power concentrated in one place in the hands of so few did very little for the common good.

As a result I decided to move far away from home for university. Aged 18 I began studying International Relations at the University of Edinburgh in the U.K. Finding that studying politics reminded me too much of what I had left behind, I switched to a degree in Sustainable Development as soon as it became available in my second year.

I’d always been an environmentalist. I was the kid who recycled all the time, switched off unnecessary lights at school and tried to force friends to watch An Inconvenient Truth at sleepovers. In fact I used to take my friends’ plastic and glass bottles home to recycle myself if I thought they were going to put them in the trash can. I was a bit of a nightmare to be honest but I still stand by those values.

If we do not have a planet to live on, clean air to breathe, and clean water to drink nothing else matters. If we have no habitat, we have no life. *ends rant* 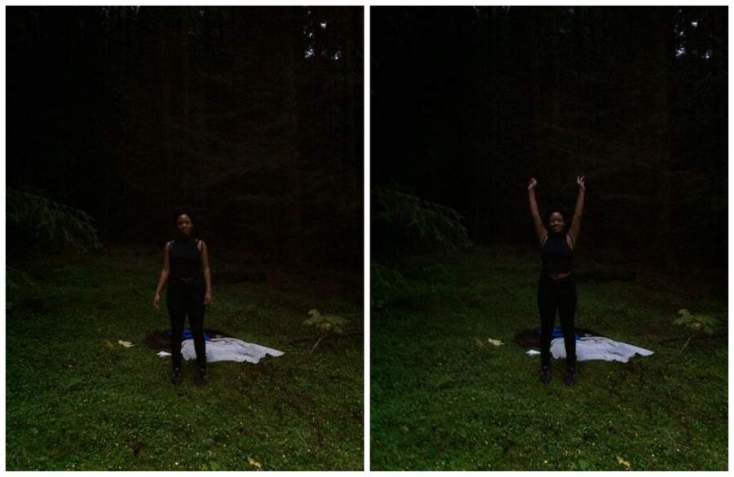 Me communing with nature at the Tay Forest National Park in Pitlochry, Scotland. The HIGHlands!

Last  year I became the first of three students at Edinburgh to graduate with a degree in Sustainable Development and, at the same time, I decided to run for President of EUSA.

EUSA is a charity/organisation with over 130 full time staff run by 4 elected full time student Sabbatical Officers, an additional 100 student bar staff, 12 bars, 4 venues and most importantly it supports our elected student officers that represent students across the university. Every student at the university of Edinburgh is a member of EUSA.

We have a £10 million turnover and any money we make from our commercial services goes right back into the running of the students’ association. We receive funding from the university in the form of a block grant and are also supervised by a Board of Trustees, that I chair, and is comprised of elected students, the four Sabbatical Officers and three external trustees. In short, EUSA is pretty big.

The President of EUSA is leader of the association and represents students interests in many realms of influence within and without the university. With presidents of student unions across Scotland after a conference on community organising.

I ran for President because I found EUSA’s elected student leadership was using their power to further their own political views, often at the expense of students immediate concerns. I saw the issues facing students in Edinburgh and I wanted to be a catalyst for change. I spent a year asking students across schools at the university what mattered the most to them.

Two things lacking struck me in particular: a public artistic outlet for students pursuing art for a career or for the love of it and sustainable transport.

Listening to the students around me, I used my presidential campaign to promote the concept of a city wide Edinburgh Student Arts Festival. One year on and we’ve just received funding from the University Principal to launch the festival with students from universities and colleges across the city in February.

Swan Lake – a work of one of the Edinburgh College of Art’s students, Lucy Henshall.

With regards to transport, it became clear to me that the free student transport available to Edinburgh students was not available to everyone. This year I have worked to support student campaigns to improve the transport available to them at campuses outside of the central area. Fourth and fifth year medics were awarded travel stipends last week and funding was extended to the NHS Shuttle Bus to allow all students equal access to its services last year.

Also, with my team I put forward the idea of a city wide Cycle Hire Scheme in Edinburgh, so that students could travel more easily and freely to their classes. We have just received £50,000 of funding from Cycling Scotland to pilot a cycle hire scheme project from Pollock (the University’s main halls) in January.

I didn’t want my campaign to be marred by unachievable goals and my presidency to be remembered by empty promises. I campaigned to let people know who I am so they’d find me approachable, trust me to represent their views, and feel more comfortable engaging in student politics, should I become president. 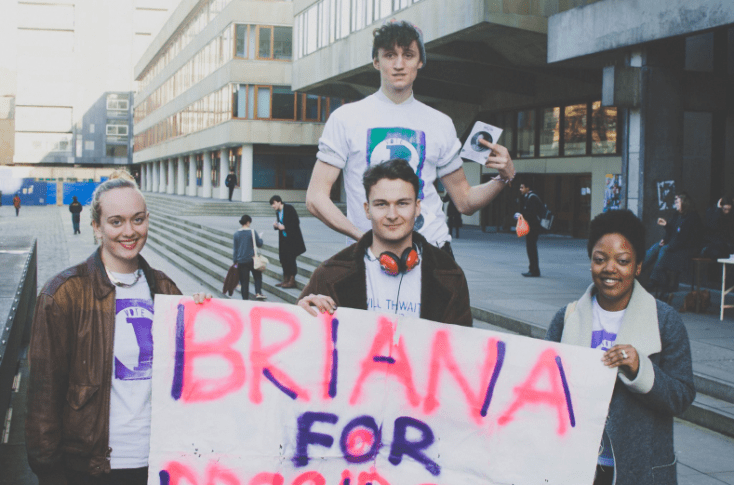 People busked outside of the library. I showcased student artwork on my election campaign website and I spoke to students in person and encouraged them to vote. I wanted to show everyone that I cared about the things that mattered to them and that I would focus on those issues not my own politics.

And we won. I am now President of EUSA and I can help make sure that student propositions and concerns are heard by the university bigwigs. To do this I am a member of university court – where final decisions on any university business gets approved. Often issues like tuition fees and estates projects are decided at other committees and approved by University Court.

Internally at EUSA I work with three other Sabbatical Officers: Tasha, Eve and Dash. I balance the duties of representing student views in university settings, managing EUSA as a separate organization, and being held accountable by students for my actions on other projects, campaigns and initiatives.

For example, we have started this new initiative, ‘Meet EUSA’, where we spend an hour every week at a different campus meeting students. I am also invited to receptions and events that range from Healthy University Photo Competition Awards to Annual Scholars Receptions. These events are not just a great excuse to dress up, but a chance to meet people and get a wider a view of the university. 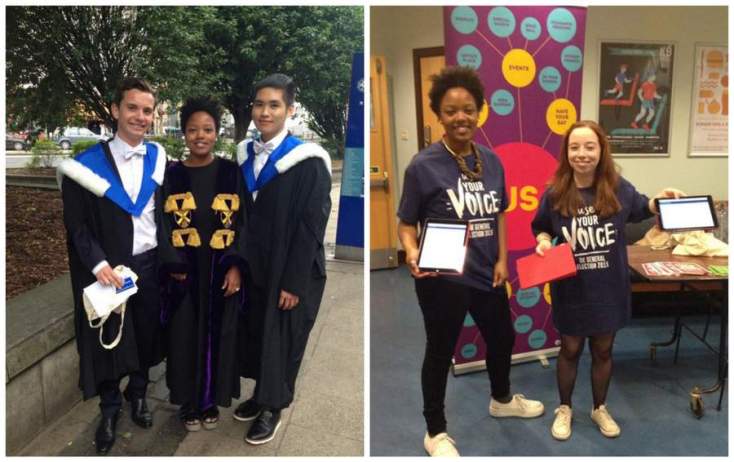 President in action at the Summer Law School Graduation Ceremony and Meet EUSA.

The beauty of being President is that I can call a meeting with anyone at the university to raise issues affecting students, and they will, for the most part, respect my views. I also interact with City Councillors, MPs and MSPs. Sometimes these interactions go swimmingly, sometimes they do not.

This job means that I have to say things I might not want to say and support views that are not my own, to represent students fairly. I’ve had to become accustomed to disagreements, compromise and learning that I can’t please everyone.

I’ve also found that working within a group of people that judge you harshly and sometimes unfairly based on your politics is a character-strengthener. I have always tried to form my opinions about others based on the content of their character and their actions not the way I anticipate them to behave based on my assumptions about them. My style is to treat others in a more gracious, respectful and open way than I have been treated in the last five months.

It’s been challenging to keep perspective and not get wrapped up in all the silly intricacies of student politics but I aim to stay level-headed by fiercely protecting my privacy. I keep my work Facebook separate from my personal Facebook. I do not check my work emails at home. When I leave the office at night or over the weekend, I do not think about the office until I walk back through the door in the morning.

Ultimately what’s most important to me in my role at EUSA is that I use this position to carry out the change I’ve proposed – that I make this cycle scheme work, that I get this arts festival off of the ground and that I help make this student association a more inclusive place for everyone.

If I do that, then all of the bullshit that comes with the job – is worth it.

Briana is President of Edinburgh University Students’ Association. She likes doodling in the margins of life by reveling in awkward moments, catching people off guard and searching the internet for zingers that put perspective on any situation. She enjoys walks in the forest of life and is the master of chairs.