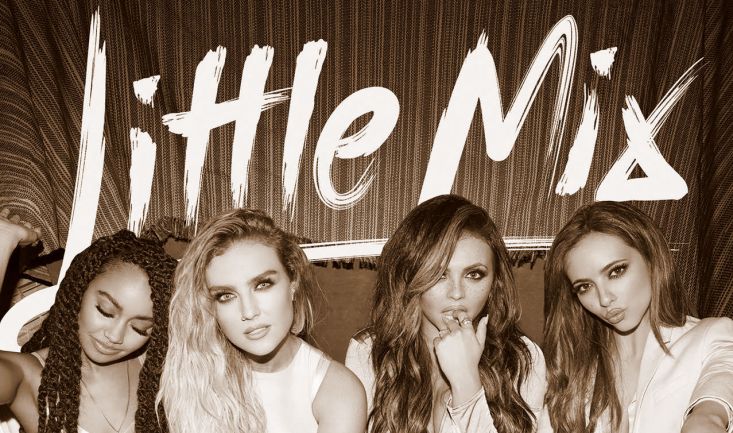 Girl groups never do well on the X Factor. So the legend says. Voices with Soul. Addictiv Ladies. The Conway Sisters. Hope. Bad Lashes. Girlband. Kandy Rain. Miss Frank. Belle Amie. All these acts lay claim to the X Factor hall of fame but each failed to survive the ‘girl group curse’. The Conway Sisters came sixth in Season Two and Hope got to the final five of Season Four but none made it any further, let alone achieved any notable success outside of the show itself. Cue general Tulisa Constalavos and her army of Little Muffins.

Post One Direction, it’s no shock that Simon Cowell would want a female equivalent to accompany them in maintaining the X Factor brand/making him a shitload of money. With this in mind, it’s unsurprising that in Season Eight of the X Factor, Kelly Rowland and Tulisa Constalavos (let’s get real – Gary Barlow/Louis Walsh had nothing to do with this important moment in pop history) put together Little Mix (f.k.a. Rhythmix) out of two girl groups that they’d already formed out of former soloists. In the past this hadn’t really worked (Hope, Miss Frank, Belle Amie) but Jesy, Jade, Leigh-Anne and Perrie were obviously quite brilliant and said brilliance became more and more apparent as Season Eight developed. It’s important to mention here that, irrespective of their ability, it’s unlikely that Little Mix would have won the X Factor without Tulisa by their side. Granted Kelendria could have lead them to victory but talent can often go unrewarded on these shows and Tulisa made sure that, in the case of Little Mix, it didn’t. Each week she reminded the public that these girls were ‘real woman’, asserted that they were ‘not safe’ from elimination and used regionalism to get the girls’ home towns to vote for them. She even morally questionably squandered the chances of early favourite Misha B, with bully claims, all in support of Little Mix. Didn’t they tell you that Tulisa was a savage?

Fast forward to 4:50 to see Tulisa in peak campaign mode.

However, even when Little Mix had won the X Factor – proper popstardom was not certain. Firstly, not all X Factor winners did a Leona. Secondly, Simon Cowell and co had lumbered Little Mix with an ill-fitting Damien Rice cover for their winner’s single. As a result, it was the second lowest selling X Factor winner’s single of all time and longterm success was uncertain. If Little Mix were to join British girl group royalty, it was up to them to prove themselves with their official debut. Could they (a) imitate the achievements of the Spice Girls and Girls Aloud or were they (b) destined for success of the Parade/Girls Can’t Catch variety?

Luckily for us they went for option (a) and now, three albums and thirteen singles on, Little Mix are one of the greatest girl groups of all time. So, as they celebrate their fourth U.K. number one with ‘Shout Out to My Ex’ and prepare to release their next album ‘Glory Days’ – here’s an ode to all things Little Mix.

The X Factor used to be my favourite TV show. In the wake of Top of the Pops and CD:UK, there was no British programme that provided a better platform for pop than Simon Cowell’s brainchild/Pop Idol upgrade. Of course, each season had it’s fair selection of acoustic bores, karaoke queens and suspect groups – but it also showcased the talent of some of the best popstars in the world – both novice and expert. Lady Gaga performing ‘Bad Romance’ in a gigantic bathtub – check, Cher Lloyd resurrecting Shakespeare’s Sister – check. Every single Rihanna performance – check. Alexandra Burke losing her shit as she sang with Beyoncé – check. Little Mix becoming one of the greatest girl groups of all time before our very eyes – check.

As a strong believer in the power of the girl group, I always routed for the ones that managed to make it to the finals of the X Factor – no matter how shoddy they were. However, it was only with Little Mix – that I could actually see myself stanning them outside of the show. Week on week they proved themselves hilarious, loveable and talented. They also had impeccable taste in music – consistently favouring uptempo pop over dreary ballads and accompanying their ever improving vocals/harmonies with slick choreography to match. Their performances of ‘E.T.’ and ‘Don’t Let Go (Love)’ clearly stand out as two of the X Factor’s greatest moments. It’s no surprise that when they came to releasing music of their own, they delivered.

‘Wings’ was a delight. ‘DNA’, ‘Move’ and ‘Black Magic’ are three of the greatest singles of all time – and ‘Shout Out to My Ex’ now sits confidently among them. There are also plenty of could-be-single album tracks in Little Mix’s back catalogue. ‘Madhouse’, ‘Nothing Feels Like You’, ‘OMG’ – the list goes on. If the day of the apocalypse dawns and the only thing that can stop it, is pop in its finest form – Little Mix will save us all.

It’s also important to mention that Little Mix are friends. This may not seem like a big deal but manufactured groups often suffer from the fact that not everyone gets on all the time. Girls Aloud (Nadine/Cheryl), One Direction (Louis/Zayn), the Spice Girls (Geri/Mel B) etc. Spending 24/7 with anyone can be tiresome, so it’s no surprise that more often than not, when strangers are thrown together in the pursuit of pop, they clash. Band-members may get past their differences for an album cycle or two but friendship is hard to fake and cracks within groups can only be covered up for so long. Fifth Harmony – for example, after one EP and two albums, look as though they’d be far happier apart. They’ve even openly said in interviews that they each see Fifth Harmony as a step in their careers before having a stab at being individual popstars.

By contrast, Little Mix appear to relish each other’s company. In live performances, they work together. On red carpets, they stand as a unit. In interviews, they send each-other into fits of laughter. Together they act as an example of what a girl group can be: a shining beacon of friendship and feminism. Their live debut of ‘Shout Out to My Ex’ on the X Factor this past weekend was evidence of that. Among the brilliant choreography and harmonies – were four friends having fun. When Perrie broke off her four year engagement with Zayn Malik in 2015 – she’d just begun the press circuit for ‘Black Magic’ and was confronted with media fuckery left right and centre. However, as this shit-storm went on, it was clear that Jesy, Jade and Leigh-Anne were there for her. Likewise when Little Mix debuted their kiss-off track to Zayn last weekend, it was clear that Jesy, Jade and Leigh-Anne were there for Perrie once more. The way they harmonise ‘sex’ to emphasise the ‘I hope she getting better sex’ line is one of 2016’s best music moments.

James Corden – being a twat.

It’s this friendship that’s made Little Mix last more than five years. It’s this friendship that will make Little Mix last far longer. Since their debut, the British public and Little Mix’s ever growing worldwide fanbase have seen these four girls grow and become four women together. We’ve seen Perrie go from crying in a performance about her broken engagement to being happy to have moved on from it. We’ve seen Leigh-Anne go from having stylist’s chuck any old outfit at her to becoming one of Britain’s fashion queens. We’ve seen Jesy go from breaking down after reading internet troll’s comments about her weight to proudly showing off her figure. We’ve seen Jade go from being fairly quiet and reserved to speaking up for LGBTQIA+ rights and publicly expressing her dissatisfaction with terrifying, British, political decisions.

As a girl group in a sexist world, Little Mix will sadly always get far more flack than their male counterparts – for what they wear, for who they date, for their ‘responsibility’ to their younger fans. However, Little Mix, like all great girlgroups before them, rise above the crap that is continually thrown their way. They work on their craft, get more confident/more comfortably adult in their output and never make qualms for their ambition. They want a film à la Spice Girls and three going on four albums in, they’re still trying to properly break the U.S. – in spite of solid sales and gold certificated singles there, they are yet to have the multi-platinum albums and number one singles there that they’ve earned in the U.K. and elsewhere. Here’s hoping that with the early U.S. iTunes performance of ‘Shout Out to My Ex’ – it’s so far managed to peak at 12 – and a tour/rumoured collaboration lined up with Ariana Grande – America will finally take note.

Sam is the Editor-in-Chief of PTL. He likes adapting surnames into brand names and spreading the gospel of Little Mix. His possibility model is Janet Mock and he turns to Beyoncé interviews for guidance on the regular. Sam tries to make out that he has his shit together but more often than not can be found pretending to be professional and/or crying watching Desperate Housewives reruns. Some episodes are really sad okay.

(Image: Shout Out to My Ex)