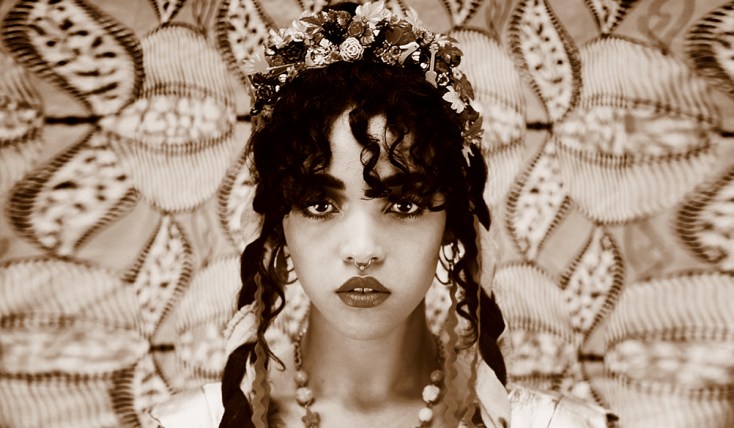 It wasn’t until months after first hearing the name FKA Twigs that when reading an article about Prince (or the artist formerly known as ‘the artist formerly known as Prince’) that I realised what FKA stood for. Despite this acronym not being another artistic quirk in the allure of Tahliah Barnett, her enigmatic persona remains appealing in that with so little material she hasn’t brought out anything (yet) to diminish her shining reputation thus far.

However, I’ve felt the same about artists in the past and been disappointed. Banks, a very promising young artist, followed her flawless debut with an EP, which wasn’t as good as anticipated. On her first EP she proved that she was enigmatic, had style, a concept, and her own sound and yet by her second EP her individuality seemed less apparent. I’d been her number one advocate and now I’m not sure where I stand with her. My love for her seems to have been overshadowed by my love for FKA Twigs and I find the intrigue of FKA Twigs all the more absorbing now that she’s released her second EP. Her Young Turks x Dazed collaboration in which she performs acoustically from a Mayan ruin in Mexico is quite simply beautiful. It deepened my obsession with her further and even now it continues to baffle me how someone can seem so polished vocally and yet so organic at the same time. FKA Twigs has a magic to her, which can’t be bought.

Artists like FKA Twigs have risen my expectation of others – I now expect artists them to have some kind of autonomy. My main issue with music today is artists who I feel are pretty faces with great marketing teams and little else. A prime example is Katy Perry: she isn’t the greatest singer, she isn’t pushing any musical boundaries and she doesn’t make up for that by being a great dancer or having an unusual voice – essentially any girl could be her.

But at least Katy Perry seems like she’s self-aware. When an Australian morning television presenter introduced Perry as the ‘biggest female entertainer in the world’ she corrected them saying that in fact, Beyoncé was. She then went on to tell them not to ‘blaspheme Beyoncé’. It is likely that Perry’s admiration for Beyoncé stems from the same place as everyone else’s – she is amazing and perhaps what she and others envy most is her autonomy. It is common fact to all of those who use any form of social media that in December of last year Beyoncé released an album out of the blue (no-pun intended) and she did it because that is what she wanted to do. Her album was completely hers, she chose its content, the producers, which songs she would sing, co-wrote them, the videos behind them and decided how her marketing campaign would work.

This kind of autonomy obviously has to be earned and sadly, not everyone is Beyoncé. But the point remains that people expect more from popstars and, whether their artistic credit is fact or fiction, the want for it is obvious. People don’t want to look up to some hollow star, they want a pop star who is in control of their own material and who deserves their place in the charts because of who they are and not who they’ve been constructed to be.

I hope FKA Twigs remains to be one of these artists who is in control. Her work is getting progressively better without losing its integrity, her second EP reaches new heights with a blend of R&B and Trip-Hop mixed with influences from various other genres. She takes the generic themes of love power and sexuality and gives them a new level of complexity which is made palpable by her gasping, stuttering and simultaneously rich and airy but effectively heart-breaking vocals.

She is the kind of artist that takes strides not steps and others follow. Both her EPs have had a video for every single track (hey Beyoncé), she addresses the objectification of the female form, she is open about female sexuality and her producer for her second EP is Arca, the producer of Yeezus. In a matter of months she has become a well respected member of the music industry and as an artist she has managed to generate something across two EPs which some artists can’t even manage to do in an entire career. Look out for FKA Twigs – she’s too talented to be ignored.

Matthew is an American and Canadian Studies student at the University of Birmingham. He is a film buff and music obsessive (seriously, if he’s in charge of the music at a party, everything’s getting remixed). He recently came back from a year long round-the-world trip, in which he hung out with kangaroos, entered a few temples and grew a beard.