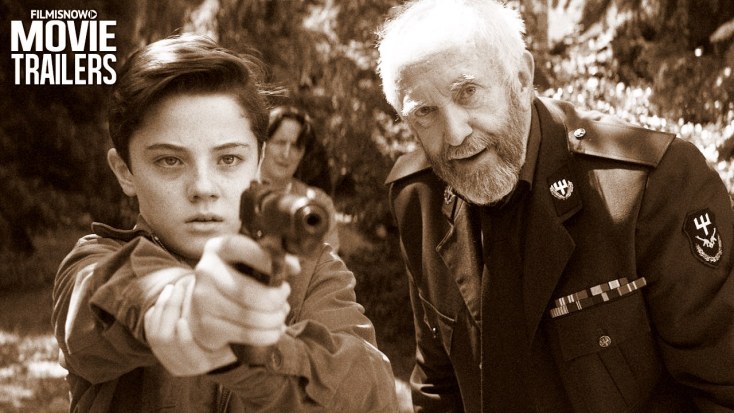 #watchthisspace is for the PTL team’s highlights and viewpoints at EdFilmFest: the ones to watch at this year’s festival, in some short ruminations by the ones who have watched.

The White King had its world premiere this weekend at Edinburgh International Film Festival, the latest in the long train of dystopian book adaptations for young adults, this one a debut novel by Hungarian author György Dragomàn. Djata, a spirited twelve-year-old played by adept newcomer Lorenzo Allchurch, lives on the land within a poor and barren community where school is a less than subtle recapitulation of Hitler Youth, and the double-standard of the totalitarian state, ‘the Homeland’, that heralds glory and unity for all its citizens, is represented by a colossal all-seeing monument purported to hide treasure at its base.

Alongside the overarching plotline – the taking away of Djata’s father for “work” by state officials toting dodgy, vaguely Russian accents, leaving Djata and his mother Hannah (Agyness Deyn) in the lurch and branded traitors – are recurrent hints of a better world. Whilst their underdog, rural district could belong to Soviet Russia in the 1950s (set design is a gorgeous aspect in The White King, from the beautiful aerial shot of Djata and his young friends playing ball on an old concrete runway to fields of burning hay bales), the house of a female general with her chess-playing robot and hi-tech chrome car, suggest a reality closer to our own twenty-first century out there somewhere, beyond reach. When Djata stumbles upon a mountain of charred bones and computer wires, interlaced and ominous, it is clear he lives in our dystopian future, not our past.

In this sense, there are moments of disconcerting insight and layers of meaning in the film, most probably preserved intact from Dragomàn’s novel. The White King clearly attempts to provide the ingredients for critical judgement and distance from our own socio-political reality for its young audience; a suspicion compounded by the film’s lack of chocolate box or decisive ending. However, contrary to our renowned representatives of this dystopian genre such as The Hunger Games and Divergent, The White King unfortunately fails to harmonize into a coherent journey to this end. Components of the heroic storyline are there, from the scene of public humiliation, to the small victory over town bullies out of loyalty to his father, to the vainglorious quest for treasure. But these scenes play out like discrete motifs, and characters drop in and out of play in ten-minute sequences without sustained interest or resolution. A great deal of effort and accomplishment in the production stages, including a strong cast sporting the likes of Jonathan Pryce and Fiona Shaw, seems to have fallen short in the editing suite, which is a real shame.

Upon the mention of The White King’s cast, I’d also like to take this opportunity to appeal to Agyness Deyn, the great British supermodel of the noughties, turned budding actress. Just prior to seeing The White King, I watched Terence Davies’ lyrical coming-of-age story, Sunset Song, in which Deyn takes the lead as Chris Guthrie. Both Chris and The White King’s Hannah are defined by their limited agencies as women, both are defined by their motherhood, both spend a good deal of time moping and weeping and waiting for the men in their lives to return home while they remain in the domestic sphere. Perhaps these role choices were not Deyn’s active/ideal decisions but instead living proof of the lack of diverse roles that exist out there for women trying to establish themselves on screen. Nevertheless, as the face of noughties androgyny and female empowerment, I imagine/hope that Deyn will start replicating this reputation in her filmography soon, and move out of the claustrophobic space of the angel in the house.

I am also sure that The White King will find its intended audience in the ardent and cautious generation of tweenagers and teenagers who so love the likes of The Maze Runner and The Hunger Games. However, unfortunately this film does not quite reach the bar that those before it have set.