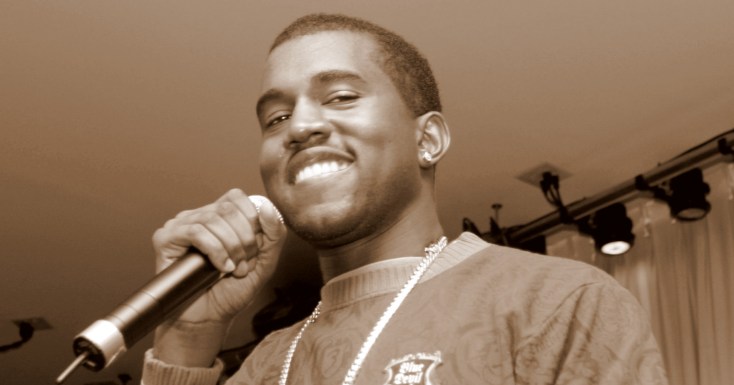 #khanyaskorner is a feature in which PTL’s Deputy Editor, Khanya Mtshali, writes.

There’s an inflation of Kanye West’s self-proclaimed genius that speaks to society’s reliance on nostalgia to escape the realities of adulthood. Being an adult, after all, comprises of trying to act like an adult. And so it explains how we’ve come to embrace things like kitsch, and nostalgia to sooth us through the times we miss our cues, fluff our lines or break down the house while trying to adult. It accounts for the onslaught of reboots like Fuller House, Gilmore Girls, and even Nickelodeon shows like Hey Arnold! and As Told By Ginger.

It is this nostalgia for the Polo-wearing Yeezy who we jammed to on our way to prom, and took advice from following a breakup that’s contributed to the mythology of Kanye West. His ability to be the most lovable scum whose album you wasted minutes of your life downloading from Tidal is perplexing. It is through Kanye West that we’re able to sentimentalize, mourn or laugh at past versions of ourselves. It is the nostalgia he inspires in us that make him somewhat of a challenge to hate.

Following his misogynistic brushes with Amber Rose and Taylor Swift along with the flurry of faux gasps from Yeezy Apologists, I started to examine my own relationship to Kanye West and nostalgia. As much as I dislike his colossal ego and bashing of women of color, there’s something about his delivery of blackness that keeps me intrigued. Unlike previous woker-than-thou rappers and neo-soul artists who pandered to a primordial Africa, West was perhaps the first hip-hop artist to discuss Africa in the present. In the remix for “Diamonds From Sierra Leone” featuring Jay Z, he eschews the easy Africa pendant references for a daring monologue in the beginning of the song, similar to that of Robin Williams’ in Good Morning, Vietnam:

“Good Morning! This ain’t Vietnam. Still, people lose hands, legs, arms for real. Little was known of Sierra Leone, and how it connect to the diamonds we own”

He grounds his angst at the industry and himself. He confesses to loving his ice chains and ice rings to the detriment of those who excavate it. In the video for the original song, he features young West African children gazing from cathedrals then delivering his squeaky “forever ever” to the sky. Even before I understood how that could be exploitative, I got the sense this was a guy who knew that blackness doesn’t give one a superior sense of humanity. Both ‘Ye and Hov admit to perpetuating child labor practices in the region. They confess their ignorance to how conflict-ridden something so shiny and alluring is.

They admit that they’re fallible humans.

Back then, Kanye was one of the first musicians I’d heard who wasn’t afraid of harsh self-critique. He continued this into “Heard ‘Em Say,” where he pays tribute to black lives before the hashtag:

“Before you ask me to get a job today,

Can I at least get a raise on a minimum wage?

And I know the Government administered AIDS

So I guess we just pray like the minister say

Things we seen on the screen are not ours

But these niggas from the hood so these dreams not far

Where I’m from, the dope boys is the rock stars

But they can’t cop cars without seein’ cop cars

I guess they want us all behind bars, I know it.”

In those lines, he covers themes that have become the subject of dialogue in our culture. He painted a portrait of a city beset by violence, poverty, unemployment and drug use. That Kanye was able to account for blackness in the Diaspora and continent is something he’s not given due credit for. It’s something that many of us fail to associate him with because of his self-aggrandizing. Beyond the cheesy Kanye-made-leather-jogging-pants-cool riffs coming from many English-Lit-grad-turned-music-journalists, there’s something quietly magical in the music he made. He was able to inspire in us a freedom to be who we were at the time.

But present me can’t prize nostalgia over the fact West’s backed out of having a voice when convenience called. Or rather, when Anna called. When class became the new race, he settled down with Kim as he turned his back on his old self. He took a swipe at my nostalgia. He snatched it from me as he buried us with music that only seemed to concern his feelings. At a time when talk on racism has become saturated in our media and music for better or worse, I want the old ‘Ye back. I miss what he did on “Diamonds From Sierra Leone.” I miss his clumsiness on “Self-Conscious” and his inspirationally bad singing on “Amazing.”

Too many of us have settled for the politics of pleasing. We gobble up a pro-blackness that’s only surface deep, forgetting how layered and complex every black experience is. We also tend to forget that in the midst of racist fuckery, we can still be quite funny. While I still find the altar-bending praise over The Life of Pablo annoying, I’m impressed by how Kanye West still manages to be tongue-in-cheek in conversation and on tracks like “FML” and “I Love Kanye”. To maintain an individuality in blackness. In a world where it is so easy to become seduced by rhetoric telling you what you should be, ‘’Ye is able to maintain his musical longevity because of how much he speaks to our experiences through the ages. And while many of us yearn for the West who wore his self-consciousness as loudly as his Louis V, he has created a persona through which we can locate who we were at a certain time. He gives us nostalgia in a lyric, a verse or a line.

Khanya Mtshali is the Deputy Editor of PTL. She likes talking about her love for vegan chilli and browsing Solange’s life on Instagreezy. Khanya also enjoys curling up with a good book and watching Come Dine With Me because it makes her feel like a grown-up. When she isn’t attempting to write stuff, she can be found working on a cure for her severe case of resting bitch face.

If you’re interested in getting involved with PTL – drop us an email onprancingthroughlife@outlook.com.