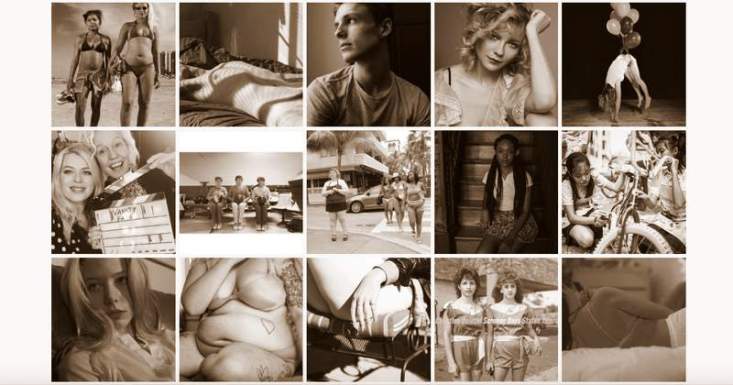 #anotherearthart is a feature in which we people tell us which one artwork or fashion image they’d take with them if they had to leave earth today and go to a brand new world empty of all our art. The idea being to find out more about people through their artistic interests. That and to look at some nice creations. Okay, so here’s the thing. I have technically already done one of these: the coveted spot of the one piece of art I’d take to another planet has already been claimed by Corinne Day and Kate Moss, a couple of years ago now, and so technically I shouldn’t really be writing this. But I figure that once we’re able to travel to one planet, we’ll be able to go to them all, and the aliens on Planet 1 are probably going to be so attached to Kate I won’t be able to take her anywhere after that. So I’m taking something else. And here’s where I’m sort of breaking the rules again: this time, I’m not just taking one work. I’m taking a hashtag.

No, I don’t mean a cut-out # to show the power of Instagram or something (although to be honest, the rate I’m going today, this isn’t entirely unlikely), I mean the #girlgazeproject. For those of you that don’t know, this project is “a curated collection of images taken by female photographers that demonstrates the power of the girl gaze[…] a multi-media project across four different platforms to generate visibility and support for the next generation of female photographers”. The curators include Inez van Lamsveerde, of Inez and Vinoodh fame, Sam Taylor-Johnson and Amanda de Cadanet, the project’s founder. And the images they choose to showcase are nothing short of dreamy. Each and every one is a celebration of what it is to be female, from Electra King’s portrait of three old ladies from Mississippi and their bowling balls to Ashley Armitage’s beautifully intimate shots of girls coming of age.

What’s more, some images do what you’d imagine a “girl gaze” would do, and subvert the male gaze: Lauren Oliver’s photograph of a man naked on a bed, face unseen and light hitting his body in all the right places, is so instantly reminiscent of countless images of the female body that you’d be forgiven for thinking it was a female body. It’s refreshing to see men and women portrayed equally, as equally sexual and non-sexual beings, in the same space, which is why the whole collective is such a great one to take to another planet. It shows that a woman doesn’t always have to look desirable to a man, that a man can look seductive in a way that we’ve come to associate with a femme fatale. Whilst here on Earth, this concept is still a little revolutionary, in a new world, it would simply be a clean slate.

The male gaze shows women as here for men, whereas the girl gaze shows women here for women; the images in the #girlgazeproject put women in the position of deciding how they themselves are portrayed. What a beautiful message that would be to take to another planet: that our bodies belong to no one but us, regardless of gender, and they deserve to be seen how we want them to be. On International Women’s Day, this is particularly poignant. So, before I whisk the entire thing away to Mars, go and peruse @girlgazeproject on Instagram and have yourselves a very happy International Women’s Day.

Hannah is the editor of ART & FASHION at PTL. After moving Milan she feels a lot less qualified to hold this position, but she’s doing the best with her non-Milanese genes. In her spare time, she can be found tending to her fringe, banging on about feminism and trying to find out whether Ruby Rose will return to OITNB season 4. Sometimes all at the same time if she’s had a lot of coffee that day.