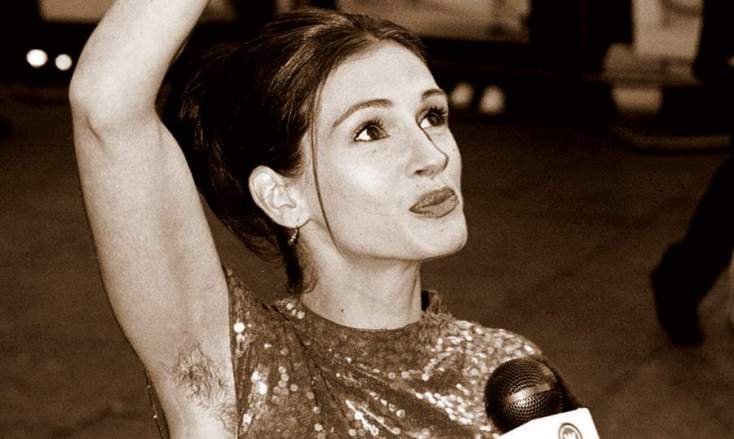 My name is Ruby, I’m a twenty year old woman and I’m hairy.

Or, at least, I should be. Over the last ten years I’ve put a lot of time, money and effort into hiding my natural state from the world. I’ve bought sour-smelling creams that often leave rashes more noticeable than the hair they burned away. Hundreds of disposable razors. Home waxing kits that make everything within a metre radius of me sticky. An epilator, which I used on three inches of leg before curling up in a ball with my eyes watering. The results? Ingrown hairs on my knees. Ingrown hairs on my underarms. Ingrown hairs on what products and salons tactfully call my ‘bikini line’. And then after a few days of so-called smoothness, ‘releasing the goddess within you’ (obviously), the whole process starts again. 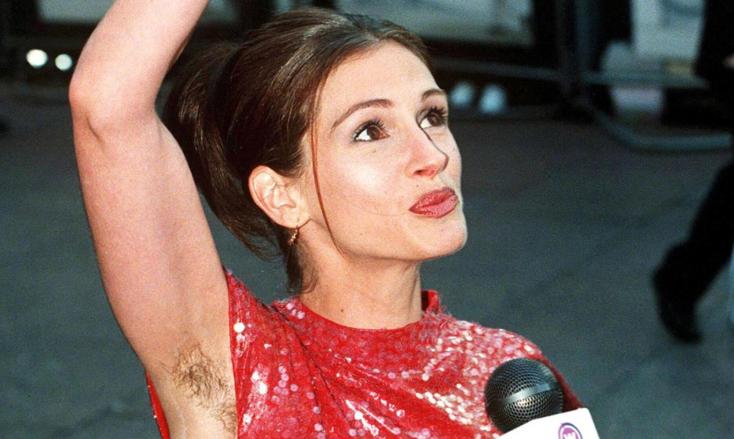 Julia Roberts sticking it to the man – image sourced from: here.

It’s not difficult to trace where my desire to get rid of my body hair stemmed from. Like many girls who grew up in the 21st century, I spent much of my adolescence with my eyes glued to a screen. Aged 14, I wanted to emulate the airbrushed beauty of the characters in One Tree Hill and Gossip Girl. Their lives seemed infinitely more exciting than mine and I saw hair straighteners, tweezers and razors lining my path to this glamorous world. It’s true that the depiction of women on tv has taken great feminist strides in the past few years, but female body hair has remained in most part non-existent. Even in Lena Dunham’s series GIRLS, which does not shy away from typically ‘taboo’ topics like STIs, female masturbation, and the portrayal of so-called ‘unconventional’ naked female bodies, the women barely show a single trace of body hair.

Naturally, it’s in the interest of wax and razor companies to market their own products as women’s essentials, rather than the optional grooming products they actually are. Their trick? To shame women into feeling their body hair is fundamentally unacceptable. Two years ago, an advert for Veet wax strips depicted a man waking up to the shock of finding himself spooning not his girlfriend, but another, hairy man. Effectively it states that any woman who doesn’t diligently wax herself would disgust her partner. Not only was this advert body hair-shaming and homophobic (the horror of two men cuddling in bed in the 21st century!) but absurd. Did the company not realise that women naturally have hair too? That a hairy woman is….a woman? The media reinforces body hair’s taboo status by surrounding us with smooth, airbrushed skin. In fact if there is a hair removal product demonstration, we see animated hairs- as if showing the real thing would be too obscene. God forbid we see actual body hair in an advert for body hair removal!

The advert in question.

Body hair censorship also affects social media, the corner of the internet which claims to promote personal expression. In 2013, Canadian photographer Petra Collins had her Instagram account taken down after she posted a photograph of herself from the waist down, wearing a bikini. As Collins highlighted in an open letter to Instagram, type ‘bikini’ into Instagram and you are bombarded by millions of beach/holiday/bathroom selfies. The aspect of the photo classed as too obscene? The few pubic hairs visible above her waistband.

Though I am well aware that the widespread prejudice against female body hair is unreasonable, I’m still struggling to overcome my aversion to letting my hair grow naturally. Several of my female friends choose not to shave and I think they look great. Moreover, I admire their confidence; like it or not, unshaven legs are still generally viewed as a statement, rather than a norm. As a young woman, my body is always subject to scrutiny, even without visible body hair, be it from strangers on the street or family and friends. This pressure affects me much more than I want it to. For example, when people see me naked, the same, unwelcome worries usually come into my head. Do they think pubic hair is disgusting? Did the other women they’ve slept with shave? My anxieties are not unique: during a recent discussion on this topic, a friend said that one night a girl he was seeing was too embarrassed to sleep with him, purely on the grounds that she hadn’t shaved. Have we really got to the point where we think someone is going to turn down sex in the heat of the moment because of a few hairs?! Unsurprisingly, this was all pretty irrelevant to him. 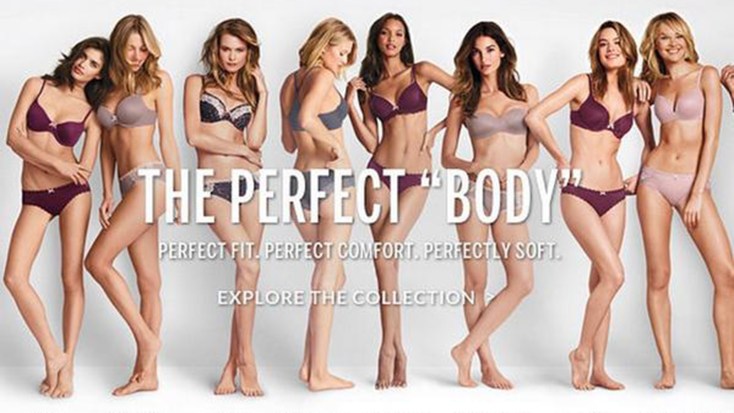 So how are we, as a society, going to start embracing women’s natural states? It’s not going to be easy to change steadfast mindsets, but it can be done. We’ve already come a long way from the days when British women couldn’t wear trousers or cut their hair short. One big step would be to normalise female body hair on screen. Moves are being made towards this already – the controversial film Fifty Shades of Grey, though problematic in many ways, does briefly show the protagonist’s leg and pubic hair, not as a talking-point but simply as her natural state. With enough pressure from customers, hair removal companies could be persuaded to advertise not by shaming women, but offering us a product as CHOICE in a sea of cosmetic and grooming possibilities. Finally, and most importantly, the best way overcome any stigma is to start conversations: online, in schools, with friends, even with people on the tube who might stare at your unshaven legs. Because body hair will stay taboo if we don’t talk about it – and I, for one, am ready to talk.

Ruby is a student from London currently living in Berlin. She spends most of her time half-finishing poems, playing the viola and trying to decide what she wants to be when she grows up. She has a life-long hatred of oranges and strongly holds the belief that a cup of tea can solve any problem.