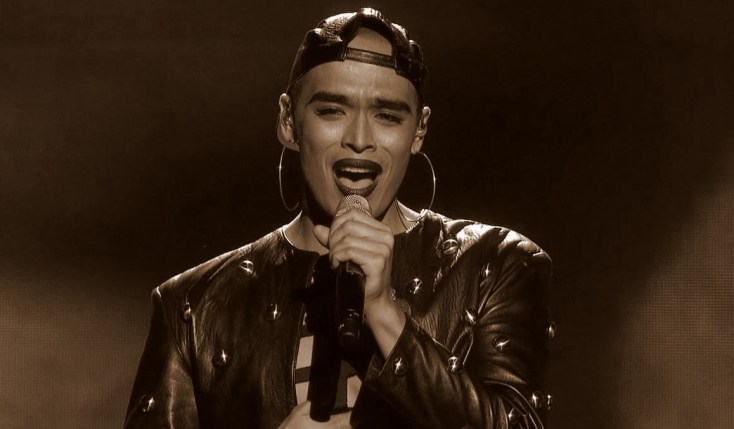 I was pretty upset with the recent X Factor elimination, as genderqueer performer Seann Miley Moore was given the boot. An early favourite to win, Seann found himself in the bottom two against Mason Noise, causing the judges to take it to deadlock where it was revealed Seann had the least votes, thus leaving the competition. I was shocked, not only to see him in the bottom two, but to then have the least votes against a contestant who’d previously thrown his toys out of his pram and received a public backlash for it.

The initial hype and praise for Seann made me believe that the public were finally willing to back someone identifies as genderfluid (especially considering the massive progress in the trans world at the moment, and the success of contestants on RuPaul’s Drag Race who feature a variety of trans/genderfluid/non-binary contestants). Clearly, not. Now, I’m not stating that this is the only reason for Seann’s elimination. The public could have been bored of the big theatrical numbers. Valid point. However, when there are less entertaining, less vocally-able contestants still remaining, I believe it was too soon for that.

Firstly, let’s look at The X Factor itslef. I think enjoy the show purely on entertainment’s basis now, with myself getting behind the ½ contestants each year who could actually be successful artists in pop music. This year, for me, it was Alien Uncovered (who got the boot in week 1), and Seann.

It’s no secret that The X Factor is dying. Ratings have continued to decline despite attempts to revamp the show, and I genuinely thought that this year was going to be a breath of fresh air. Up until Judges Houses there was so much potential, half of which was wiped out at that stage. Continue on to the live shows, and that quota is shrinking drastically. The X Factor has always received a bad rep for how bland contestants with a good voice get so far and the same thing will happen this year (I’m hedging my bets on a Che, Lauren, Louisa/Anton top 3) as they appeal to The X Factor’s main voting demographic. They don’t want to see a guy in a dress, or a confident girlband rapping. They want a ‘family friendly’ person with a nice voice.

You only have to look at the past series of the show to see that there is a trend amongst the winners, and how often their runner-ups succeed them. The show has never produced incredible winners (except Little Mix, and at a stretch, Leona Lewis). Ironically, it should perhaps be called ‘The Voice’ as there is very little interesting about those who win, but they do often have a decent set of pipes. Openly gay contestants tend to last a few weeks whilst they’re ‘camp & funny’ (Rylan, Diva Fever, Johnny Robinson to name a few) whilst the quieter ones slip under the radar and often come out some stage after the show has finished.

Joe McElddery publicly came out nearly a year after winning the show.

This is reflected in the entertainment industry, where if you’re openly gay, you’re expected to be either camp and funny (Rylan, Alan Carr), or to fit the heteronormative cis-male ideal (Sam Smith, Tom Daley). In popular music right now, it is Sam Smith and Olly Alexander’s band Years & Years leading it in terms of gay men having notable success in pop over the last two years. This is not ignoring Steve Grand, Will Young, and Troye Sivan who are also openly gay artists enjoying success in the music industry right now.

It’s great that we’ve progressed so far (although note: not particularly camp) and I’m glad that we’re starting to be represented properly in the music industry (that being said still not diversely). When it comes to blurring the lines in gender and sexuality, however, there’s even less mainstream representation. Miley Cyrus has recently described herself as pansexual and gender fluid. We have Conchita, drag queen with a beard. Angel Haze, Tyler Ford, Violet Chachki and Jaden Smith have all spoken out in regards of alternative gender identity. Now in the UK, we have Seann Miley Moore. This is not a new thing either, in the past we’ve had stars from the likes of Boy George, David Bowie, Prince, Marilyn, and Grace Jones, to name a few.

I’m a firm believer of constantly-shifting sexual and gender fluidity. Yes, I generally identify as a homosexual, cis-male but if I decide I want to wear a dress and heels, damn it I’m wearing a dress and heels. It’s a complete social construct that heels and dresses are women’s clothing. Men are so scared of being emasculated that they wouldn’t dare compromise it. There’s elements of masculinity and femininity in everyone, and this should be embraced. Similarly, if I fall in love with a women, I fall in love with a woman. Sexuality and gender identity are fluid and they can constantly shift for a person. I’m extremely proud that this is being represented in the media by such positive role-models, and I only hope they continue to do so.

It’s difficult to change opinions, and there’ll always be people who believe that men should fancy women, only women can wear heels (unless you’re a drag queen because then of course it’s hilarious/sarcasm) but there are also people with these opinions that are slowly, starting to change as they discover and understand different queer identities. Just because I’m biologically male, why should I act & dress in accordance to a set of social constructs which tell me how my biological gender should behave?

Perhaps it was just a little too soon for The X Factor viewing public to get behind a genderqueer act, but thank you Seann Miley Moore for being a stepping stone in acceptance.

Daren Pritchard is a Performance Artist based in London, and is an activist for LGBTQ+ Rights & male body image and eating disorder awareness. Amongst producing and performing one-man shows, and writing articles for his blog, Daren enjoys settling down with a bottle of Sauvignon Blanc at the end of the day.

This article is part of Season V of PTL which is run in association with All About Trans.

(The image used to head this article was sourced from: here)