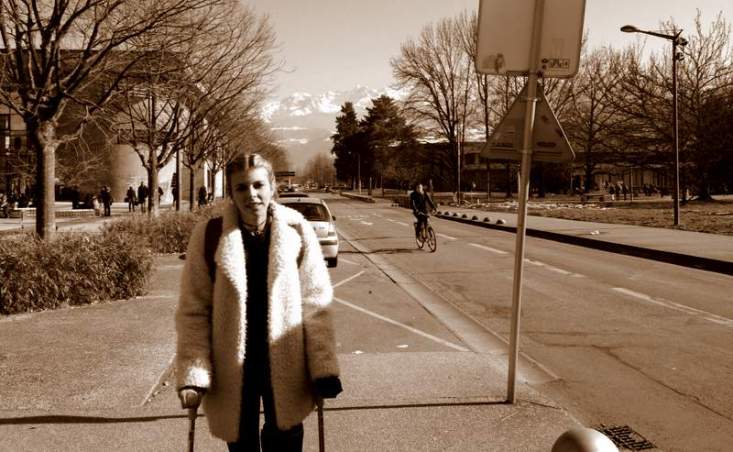 #lostintranslation is a feature in which PTL asks people who have moved abroad, temporarily or for the long haul, to comment on their experiences in their newfound homes. To tell us about why they moved, what they’ve learnt and all the awkward situations they’ve encountered along the way.

Grenoble, better known as the industrial heartland of France, is a small city nestled in the heart of the French Alps and where, for better or worse, I reside now and for the duration of my Year Abroad. 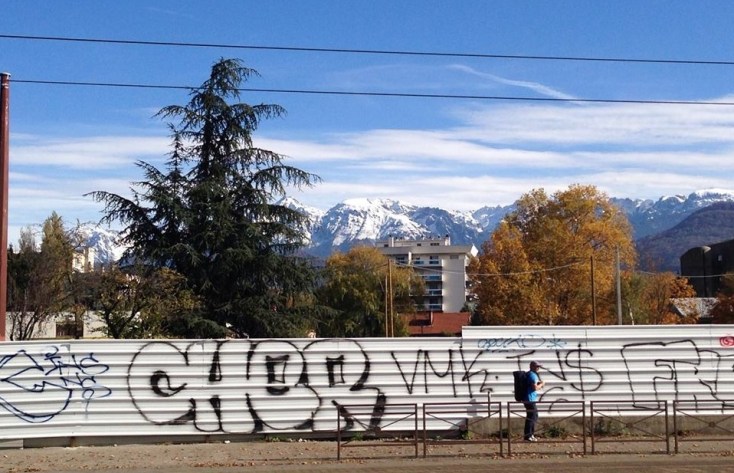 If you google it you’ll come across a trip advisor article optimistically entitled ‘Best of Grenoble’, which cites a rather worrying number of Irish pubs as it’s most renowned establishments. Lonely planet more fittingly describes it as ‘one of France’s most important centres of scientific research and high-tech industry’, and calls its nightlife ‘effervescent’, a word conveniently ambiguous enough to arouse suspicion.

With a name that sounds uncomfortably like Chernobyl, industrial façade and prevailing demeanour of an abandoned soviet military base, it doesn’t make a wonderful first impression. However if you dig deep enough you can strike gold…or at least copper. The old town in the centre of Grenoble is surprisingly charming, with its windy streets and flower-filled window boxes. It seems like a quaint provincial town in the south of France, but if you stray too far it starts to look worrying like the setting for a dystopian future film.

Its main attraction is the fort de la Bastille, which sells itself as a hilltop fortress with panoramic views of the city. Assuming that that’s what the people want. The reality is a long and treacherous walk up to a few stone walls covered in graffiti, overlooking a city that isn’t called the industrial heartland for nothing. It definitely serves a purpose, but that purpose isn’t a picturesque one. 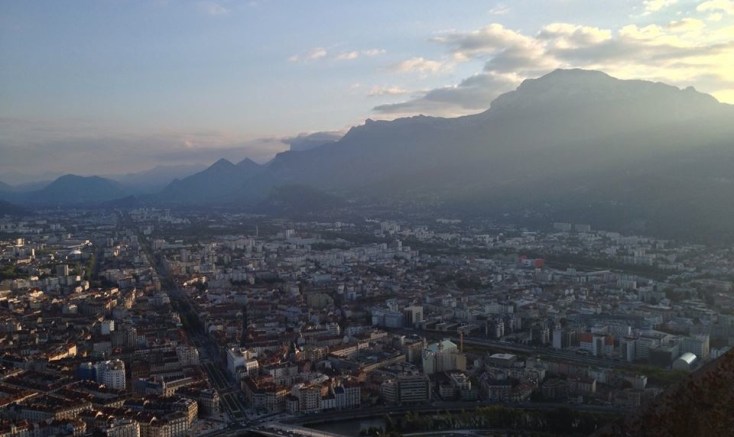 The view from above.

By way of nightlife the most notable establishment is a not-very-hidden-away-bolthole-of-sorts called: London Pub. It’s exactly what it says on the tin. The pub’s owner has built up an almost enviable collection of every type of memorabilia that can even be tenuously linked to London, including a life-sized mannequin of what I think is supposed to be a beefeater, but has suffered a misplaced sense of identity and is paradoxically sporting a kilt. Whether or not the owner has ever actually been to London remains to be seen. If he ever did go I think he’d be disappointed by the distinct lack of neon disco lights and Vengaboys. What I can say for the man is that no one in the history of time has ever put more care and devotion into amounting such a collection of cassette tapes, or indeed has ever purchased so many copies of the lesser known albums of the Bee Gees. Nor has anyone ever shouted the lyrics ‘come on Barbie lets go party’ with such ferocity.

At this point you might be wondering exactly why I chose to come to Grenoble, but one of the redeeming factors of Grenoble – and there are quite a few it transpires – is the skiing.

Being in the Alps, you are never more than an hour away from ‘gnarly powder’.  I pictured myself atop snowy mountains, drinking vin chaud in wooden deckchairs while the sweet soothing sounds of après ski wafted around me. I also had visions of myself and friends, similarly attired, synchronised skiing down a slope to the soundtrack from Top Gun. Not to menytion the occasional mountain lodge with roaring log fires, much akin to the scenes in Wham’s seminal ‘Last Christmas’ music video. But it was not to be. 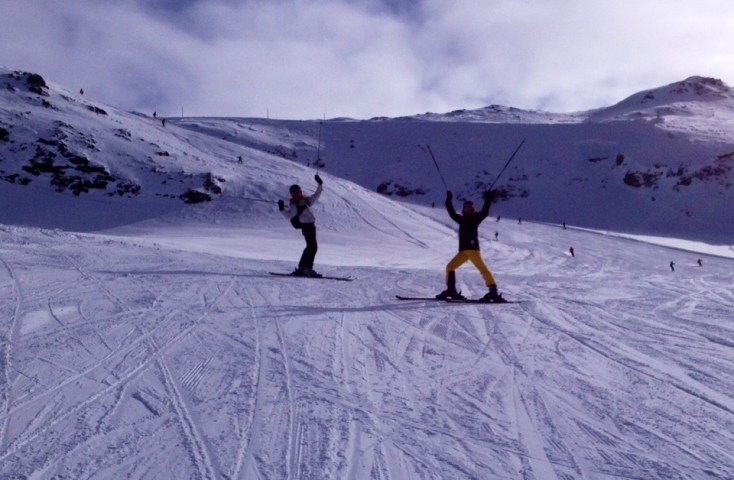 What could have been.

In January I had a skiing accident and tore two ligaments in my knee. I’d be lucky to walk, let alone ski.

To add insult to injury (quite literally), there’s a horrible chance that the injury I’ve procured might have been partially due to a fall I’d had just a week before when dancing in…you’ve guessed it: London Pub. The irony of my situation does not fail to astound me. In fact, it’s slapped me in the face every day for the past couple of months. Having to manoeuvre myself on crutches through precarious conditions, in ice and snow, under the gaze of smug skiers, their boots casually slung over their shoulders, sporting their goggle marks like badges of honour, I have constantly been reminded day to day of what could have been.

But every cloud has a silver lining, and in a bizarre twist of fate, it turns out that the Grenoble university campus is the flattest in France, a factor it is apparently renowned for, and an unforeseen godsend for the ever increasing number of us avid skiers (or avid frequenters of London Pub) now on crutches. 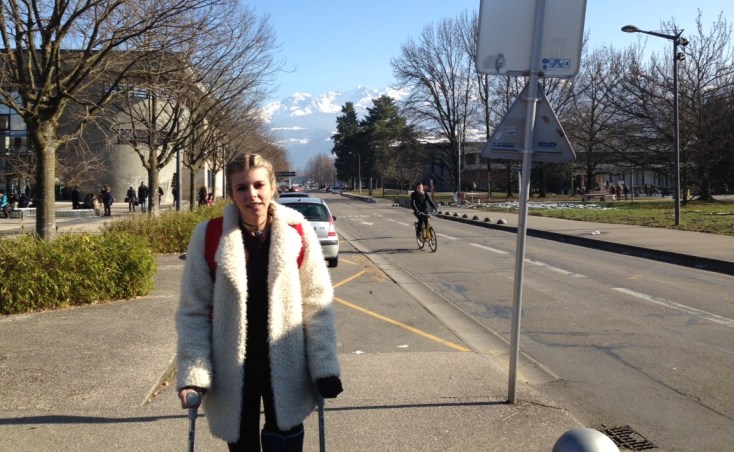 Would I recommend Grenoble to those embarking on a year abroad? It depends what you’re looking for. I’ve heard many of my friends describe their respective year abroad cities in France as ‘mini Paris[es]’. Grenoble, at a push, for all it’s unique industrial charm, could be described as a mini Birmingham.

The trick is to go with low expectations and be pleasantly surprised. And the uncomfortable truth is that humans adapt to their environment; after a mere few weeks London Pub will feel like a second home, you’ll find yourself taking friends that come to visit up the Bastille with a (misplaced) sense of pride and you’ll become surprisingly accustomed to the faint smell of urine that prevails. And if you’re as unlucky as me, you’ll become uncomfortably well acquainted with the many physios that earn their living from being within close proximity to the hazardous slopes, or the slippery floors of London Pub.

And remember: it’s what’s on the inside that counts, because the truth is you can polish a turd.

Amy is a third year Edinburgh student currently studying on her year abroad in France; enjoying life as much as one can in the industrial heartland. She has acquired a taste for watered down hot chocolate ‘à l’hôpital’ and has broadened her linguistic repertoire with an incontestable knowledge of surgical knee terms.