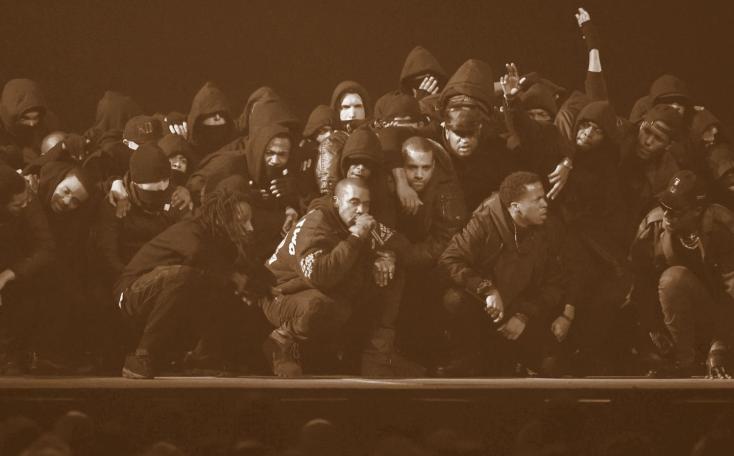 #mydreamfestival is a feature in which we ask our readers and contributors to curate their dream festival line-up through four, unique categories: big headliner, undiscovered newcomer, amazing DJ, curveball.

To kick things off, Liz (Deputy Editor of MUSIC) and I (Editor of MUSIC) are putting together our dream line-up for you. Enjoy, and if you want to get involved just drop us a message! – James

KANYE WEST – On Tuesday, I was lucky enough to attend Kanye’s surprise show at London’s KOKO. Whilst there, Kanye and his endless stream of guests sped through a setlist that redefined my understanding of an unrelenting setlist. Whilst hit after hit continued to fill the room and get the crowd involved, Kanye’s undeniable stage presence and charisma ensured it was a gig no-one would ever forget. For #mydreamfestival, Kanye would make the ideal headliner. JF

RADIOHEAD – I was incredibly lucky when I was younger to be taken to Glastonbury as our family summer holiday quite a few times. It was amazing. However, the ignorance of my 9 year old music taste has left me with a wealth of guilt ever since. In 2003, I complained all the way through a Radiohead headline set. At my dream festival I would turn back time and fully appreciate Radiohead – with some Atoms for Peace guest appearances too maybe. EC

KELELA – Kelela first caught my eye with her amazing mixtape/album Cut 4 Me in late 2013. Since then, she’s continued to make exciting, boundary-pushing musical hybrids that amalgamate pop, soul, electronica and everything inbetween. Her most recent work, ‘A Message’ is a beautiful collaboration between herself and Arca – it sees Kelela’s uniquely beautiful vocals sit above Arca’s incredible and genre-defying production technique. For #mydreamfestival, Kelela would be the perfect (largely) undiscovered newcomer. JF

DIGGS DUKE – I suppose he is relatively undiscovered, he has been championed by Gilles Peterson (as have most of my favourite artists). Peterson perfectly described his sound as being ‘where Frank Ocean meets madlib’; could there be  a better combination to produce modern soul music? EC

HEIDI – Heidi’s monthly show on BBC Radio 1 is an amazing tour-de-force explosion of house and jack. Her passion for the music she plays is undeniable, and her live shows are perfect for anyone who wishes to dance, dance, and then dance some more. For #mydreamfestival, a Heidi DJ set would be as close to perfection as you could get for anyone who loves their house music. JF

ANDREW WEATERALL – The coolest DJ in his 50s, famed for his beard which he recently had people bidding on for £1900 on ebay (later taken down because ‘the item was lost or broken). His club night A Love From Outer Space has a cult following of ‘space cadets’ and he describes it as ‘an oasis of slowness in a world of increasing velocity’. I can’t think of anything better on a heady summer night at #mydreamfestival. EC

ALL SAINTS – In an amongst the pop explosion of the late nineties, it is easy to forget the original ‘cool’ girlband. With songs that transcend their era, an All Saints set at #mydreamfestival would be full to the brim of iconic hits. From the ethereal early 00s pop perfection of ‘Pure Shores’ to the soulful vocals of ‘Never Ever’, my curveball act at #mydreamfestival would ensure that the crowds were singing along in their thousands to the tracks that soundtracked their younger years. A curveball isn’t a novelty – it’s simply bringing something to the table that you would have otherwise forgotten. All Saints are the epitome of underappreciation in pop – at #mydreamfestival, we’d show them the love they deserve. JF

DEATH GRIPS – So far #mydreamfestival has been a pretty chill event. I feel like after the Radiohead and Andrew Weatherall, things should be switched up with an exclusive reunion of the mental duo that form Death Grips. This would be the time for everyone to lose their shit with Stefan Burnett, the kind of activity that should be reserved only for #mydreamfestival. After this, everyone can go back to their daily business without any pent up aggression. These guys are a perfect curveball, fans are constantly debating whether they are together or not, if new material is coming or not. #mydreamfestival would be the perfect time for the reality to come out and for them to debut tons of new mad tracks. EC

James is the Editor of MUSIC at PTL and Liz is the Deputy Editor of Music at PTL. James enjoys watching Question Time on Thursday nights, going out on Fridays and watching as many awful films on Netflix as he can. Liz enjoys radio podcasts, hip-hop and slang she can’t quite pull off. If James won the lottery, he would create a musical based on the works of Janet Jackson. Liz would support this decision.