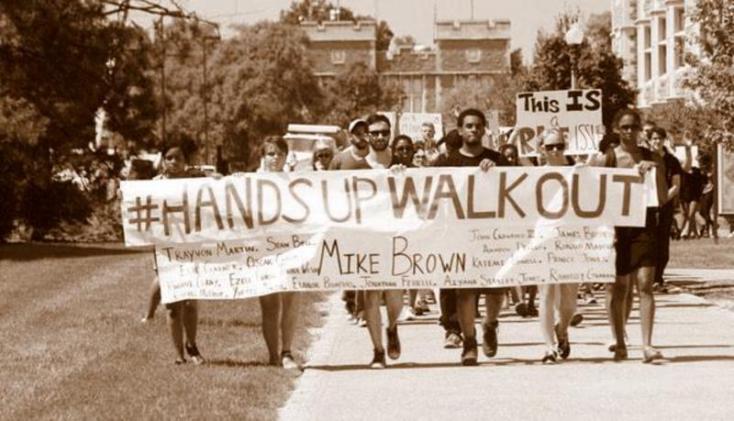 The precept of progress is inscribed in our data as a species. It is coded in our DNA.

‘Progress’ provides purpose and the pillars of civilisation – religion, industry, the documentation of history, to name but a few. It prevents widespread nihilism and chaos. It is composite of the instinct for survival and hope for improvement in the worst situations that befall us. Cows and walruses, for example, do not possess this sense of preservation: if panicked or frightened, to a chemically calculable extent, they will refuse to breathe until they have asphyxiated themselves to death.

Myself and my generation were raised on the wave of the turn of the twenty-first century. Our parents and grandparents’ epoch had participated first-hand in the mass movements that catalysed change de Jure and de Facto, in the name of equality for multiple marginalised factions of society. We, in our school uniforms, had the history textbooks to prove it, in which black and white photographs illustrated the legendary sit-ins and hundred-thousand strong marches of mainly student demographics in the name of civil rights.

These were the student movements that moved: real-time, real space. 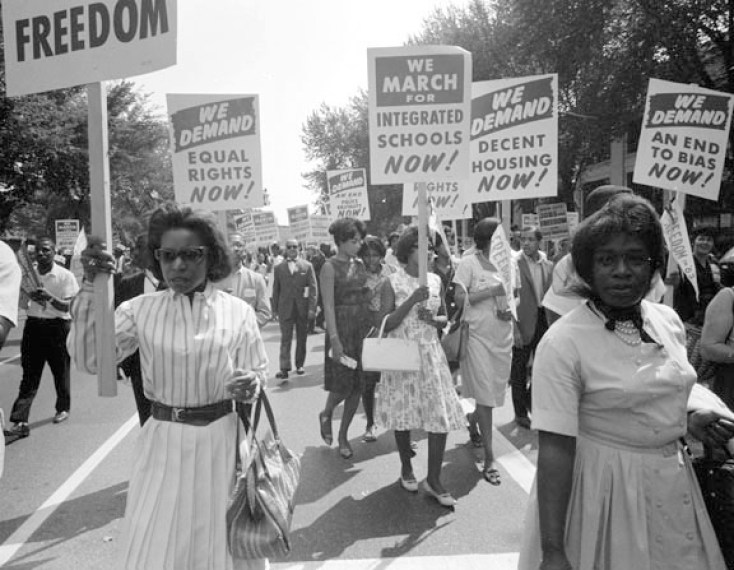 Our epoch of progress, if you like, is technology. These days, and in the years to come, the documentation of history is occurring online. If there are textbooks in ten years, they will feature the words and images that were immediately available at the click of a button for all the world to see, read and hear, in the weeks after Michael Brown’s body lay in the street for four hours on a Tuesday afternoon.

The literature of technology – of social media and mass-sharing awareness – has transformed that place-name, ‘Ferguson’, into a politicized noun with galvanising velocity; Ferguson has not adhered to this principle of progress. Its small pocket of America is currently serving as the one visible wormhole in a bad apple: in the days after Mike Brown’s death, photographs of police force against protesters were placed in split-frame with identical shots from the 1950s.

Last Monday Barack Obama, the US’s first black president, urged for calm on one side of a split-frame whilst black youths set the streets of their hometown ablaze on the other – upon the news of Darren Wilson’s walking free from indictment after having shot an unarmed teenager dead.

This is not evidence of a stagnant ‘civil rights movement’; even the name sounds archaic. To the contrary, beginning with Johnson’s Civil Right Act of 1964, there is a loud and accessible archive of lucid, systematic legislative action, for the law-enforced consolidation of equality for all Americans, regardless of race, religion or gender. 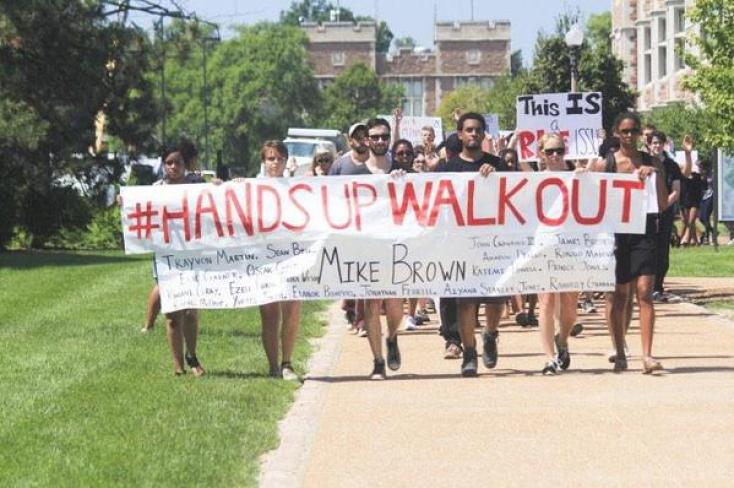 Now, quite literally, these laws are being contradicted by the literature – or rhetoric – and the actions of the people who represent them. Individual actions by individual (white) policemen are, apparently, outside of the laws they implement within society: a black youth is more than twenty times more likely to be killed by a police officer than a white one.

Not only this, but there has been increasing evidence of larger, more powerful bodies within the American legal system protecting these individuals against the media, the masses who disagree with that individual’s actions, and especially against a potential prison sentence and/or formal recognition of a possible crime.

Not only was Darren Wilson’s identity withheld for days after the shooting, but the Grand Jury has not even allowed recognition that the death of Mike Brown could have been anything other than the fulfilling of a ‘monumental responsibility in a conscientious and expeditious manner’ by the policeman who killed him, according to the St Louis prosecuting attorney, Bob McCulloch.

In the past two weeks, a twelve-year-old – this child cannot even be considered in the teenage demographic – was killed by an officer who mistook his orange BB gun for a live one. A twenty-eight-year-old father has been killed in his own stairwell by an ‘accidental’ shot from a policeman of the same age. Last month, a black man was arrested and taken into custody by two officers because he was sitting idle on a public bench – waiting for his children to be released from school.

Before our eyes, piece by piece, the progress of the late twentieth century is being deconstructed by the very system that should be holding it in place. This is not progress; this is a legislative movement performing a boomerang in front of our eyes. We can see it happening and still don’t expect it to hit us where it hurts. 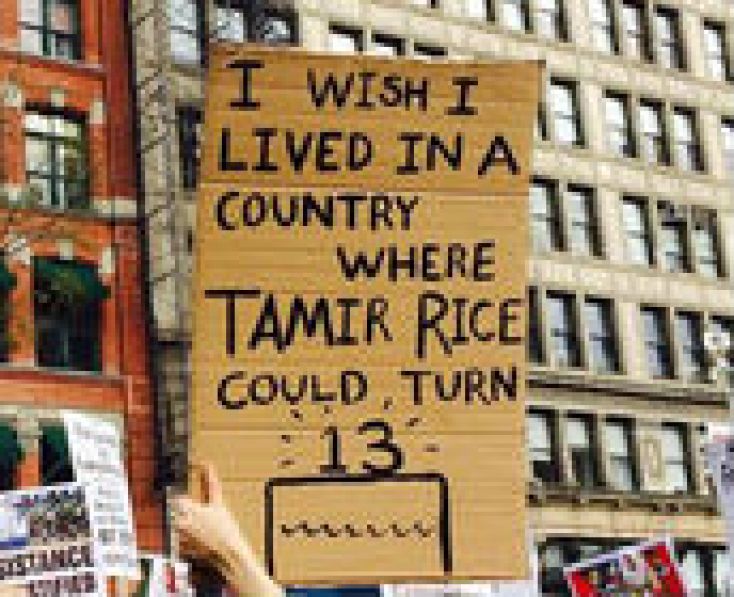 The world is watching the first generation of African-Americans who were born and raised without an inherent submission and fear of the police and authorities, foiled in their individual and collective attempts to assert their rights. This is the generation who have been brought up to walk upon and mess around in the streets as if they have a right to be there, who utilise the education the world’s superpower has given them to stand up for themselves in the face of accusation – we are watching them get locked away or shot and killed.

The message from judiciary America to its black citizens is this: forget nursery rhymes, teach your babies to raise their palms and splay their fingers when they see a white man in uniform, if god forbid they have black skin. Teach them, again, that the streets are not theirs to sit or stand idle on. Do not stand on the pavement, stand in the gutter.

Do not rely on family stability when times are hard – the father must be absent save for a criminalised blemish of his name. Do not rely on the calm and rational application of knowledge in legal and political situations – you are using a rhetoric that was created to use against you. You are outside of the system of protection. Literature and discourse is becoming, again, a weapon to use against the marginalised. 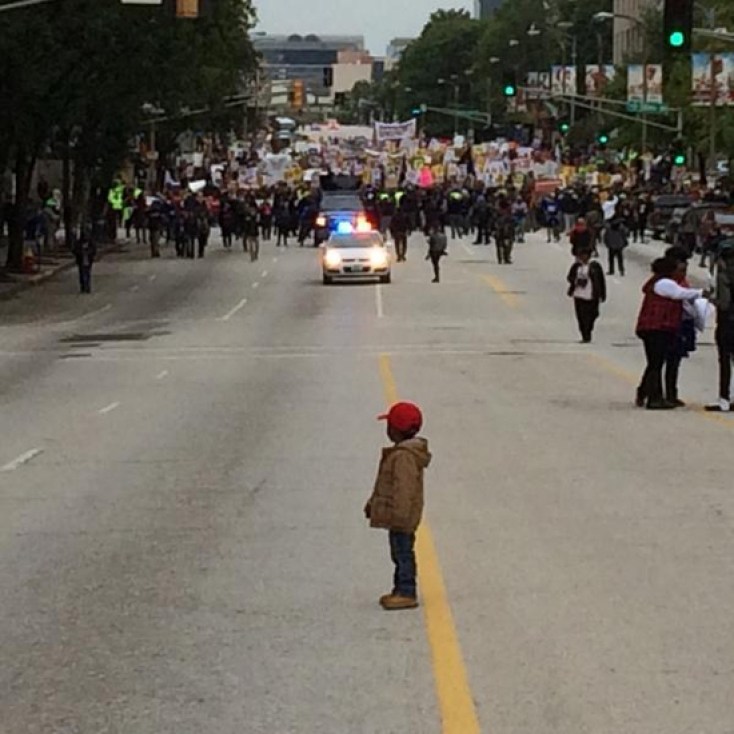 However, whilst the vague impression of progress is being broken piecemeal, the literature of technology has luckily remained, for the time being, largely+ democratic for most of the world.

Across the internet and across the pond outspoken disbelief, disillusionment and outrage are prolific on social media; one-hundred and forty characters and a whole backlog of words simply preceded with the single “#” symbol are enough to galvanise mass movements on ten times the scale of the previous century’s civil rights campaign. With access to immediate and constantly updated information from vast, varying sources, and mobile phone video and picture content that plays out American reality just inches from our faces, this is all occurring in our direct line of sight.

But when we share and comment, we are using a forum, a ‘voice’, that is saturated with perpetual outrage. At the click of a button, we are the campaigners for multiple causes with minimal effort. In the same ‘boomerang effect’, what seems immediate and local and is treated as such, actually just locates itself in a spaceless vacuum where thought and action bounce from one platform to the next – a kind of global-local disconnect where nobody can be held accountable or organised.

A like and a share is not a real, political act – and in reality, this mass generation of opinion simply leads to new coined phrases like the ‘Stepford student’, whose political ideas are described as ill-informed and self-righteous enough to hinder free speech. 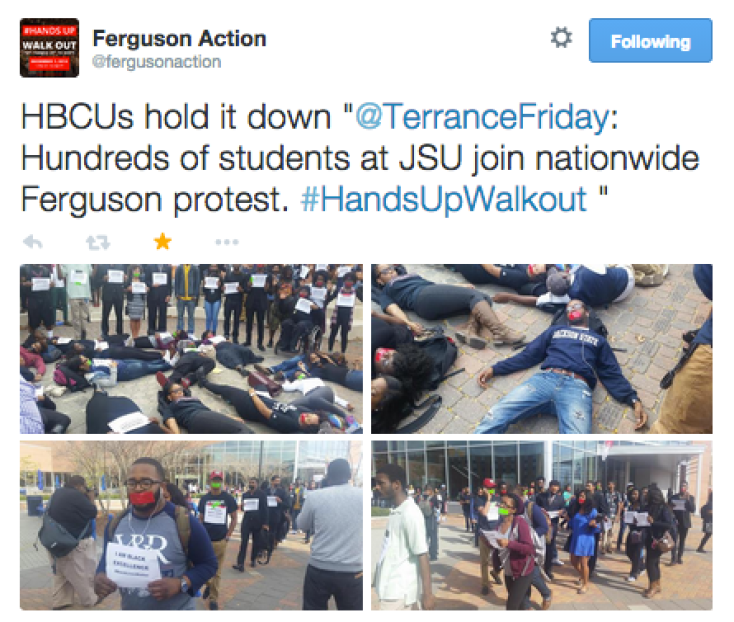 As a generation of young people with insurmountable information and influence at our fingertips, we owe it to our counterparts across the Atlantic to find a way of transmuting that thought and sentiment out into reality, in conversation and action that takes longer than a few seconds and more than two sound-bit sentences. Progress is investment – it deserves real-time, real space, and real outrage.

Those US authorities who are so busy condemning on the news channels that have always been the province of professional, monied elites, need to know that the actions of real, live protesters shock-waving across America in the aftermath of the Grand Jury’s decision are no more criminal than their own.