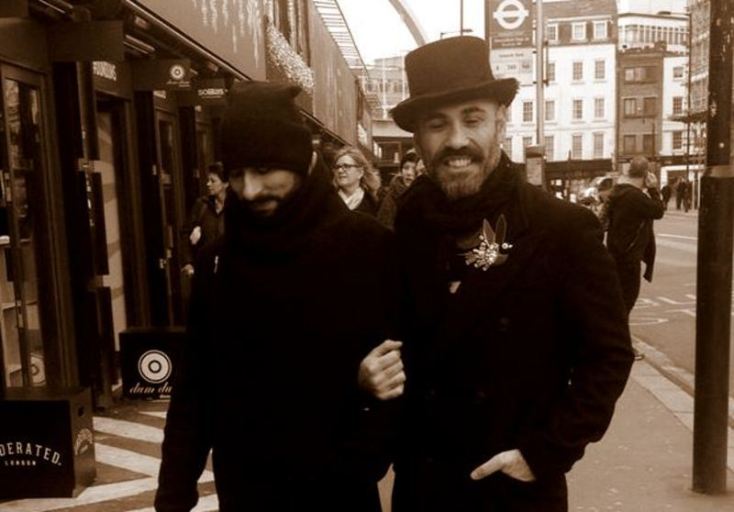 #streetstyle is a feature in which your friend and ours, Hannah Beer, stops, photographs and questions people about their outfits. The idea being to learn about people’s lives via their clothes. That and to look at some cool fashion.

They say in London you’re never more than 4 ft away from a rat. I think in Shoreditch, you’re never more than 4 ft away from someone immensely stylish. Whether or not the first statement is true (I’m really hoping not), this Friday, when I went to Shoreditch in search of some #streetstyle worthy people (to distract myself from the fact that even though it was Black Friday, my student loan still wouldn’t stretch far enough to buy myself anything new), I reaffirmed the latter for myself.

I saw Paolo and Danilo literally the minute I left Shoreditch High Street station, and Miranda approximately 2 minutes after that. As all my loyal readers know, I love anything black, but that doesn’t mean I’m averse to colour, which is why I’ve chosen these images to feature this time around. They couldn’t look more different from each other, but they are equally as fab. 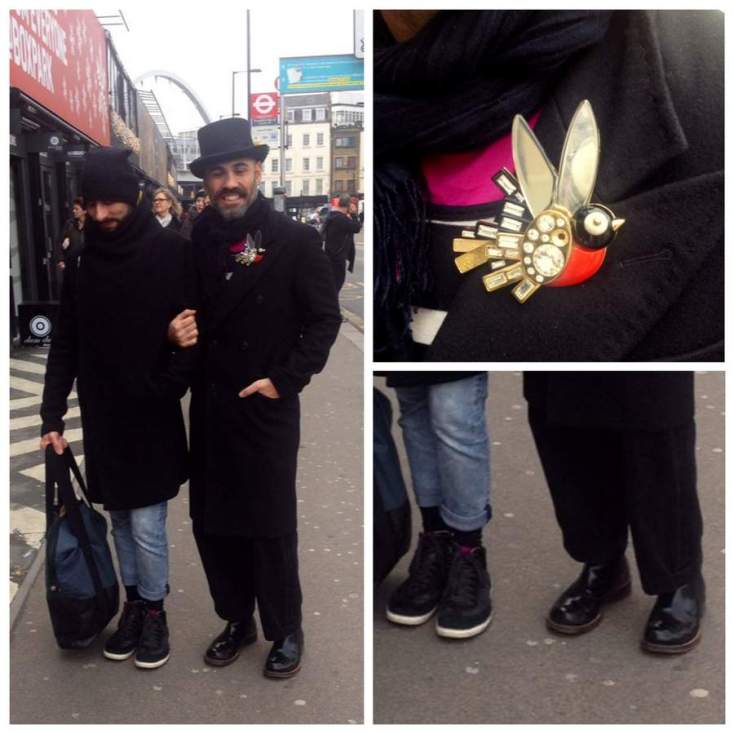 They could only be Italian, right? I saw these two walking down the street and they just looked like the poster couple for sass. I love everything about their whole collective ensemble, from the cut of Danilo’s coat to Paolo’s trousers, but from the minute I saw them, I was drawn to two things: Paolo’s incredible hat and that beautiful brooch. I didn’t have a chance to chat to them for very long, as they were off to a meeting, but luckily they let me take their photo and find out a little bit about these two items.

I first asked about the brooch and found out that Paolo designed it himself, and when I probed a little further, I learnt that he did so whilst being a designer at none other than DSQAURED2 back when he lived in Italy. The hat, he said, was from ‘a little shop in California’. I didn’t want to ask any more, because there was something charming about the image of these two impeccably dressed Italian men perusing a ‘little Californian shop’ for a felt top hat.

Seeing these two not only restored my faith in men’s fashion, which seems to have descended (in London at least) into a pit of wavey garms and man buns (there is such a thing as too much of a good thing). It also made me very excited for this time next year, when I will be in Italy and, with any luck, surrounded by people as stylish as this. 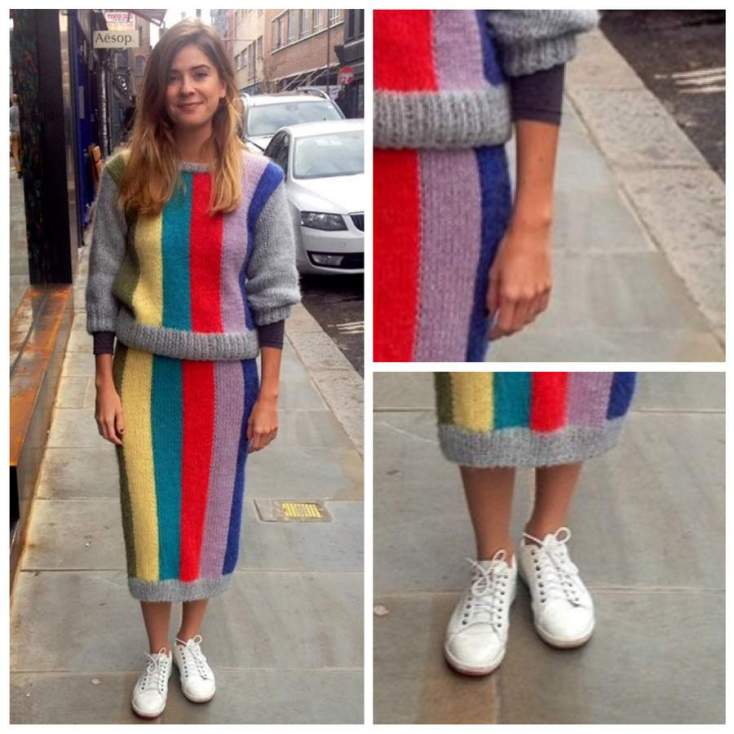 I caught Miranda just as she was getting into a cab (which I made her hold because I wanted to take her photo so badly). She told me that she’s just finished a Masters in Fashion – well, of course she has, she’s wearing a woollen twin set when most of us consider twin sets to be a thing of short skirts and summer. She said that she wasn’t looking her best today (I disagree), but she’d let me take her photo because she thought she liked the outfit she was wearing (completely, 100% agree).

Most of the people I’m drawn to for #streetstyle I’m drawn to because of their boldness, and I think Miranda’s set the bar pretty high on this one now. And no, apparently this wasn’t a one off: Miranda said she always tries to dress this colourfully, which is nice, because it means that there’ll always a be a part of grey, drizzly London made a little bit brighter by a rainbow twin set.

In the brief time I had to chat with her (I didn’t want to hold her cab up for too long), I found out that she was from Argentina, and the twin set was the creation of a designer friend of hers back home, Julia Schang Viton. A quick look at Schang Viton’s website confirmed the thought that the twin set inspired; that whoever designed this is really quite good. I encourage you all to browse the website for yourselves, because the collections are all just as beautiful and unusual as the outfit Miranda’s wearing.

Overall, my Black Friday visit to Shoreditch wasn’t very black at all. I learnt about a new designer, avoided spending money I didn’t have, and, what’s more, I wasn’t that lady who had to go to hospital because she was hit over the head with a TV in a crowd. A rather successful day, as they go.

Hannah B is the Editor of ART & FASHION at PTL. When not thinking about fashion, she can probably be found writing about feminism or tending to her fringe. Whilst deep down she’d like to be Audrey Hepburn when she grows up, she’s realised with age that this is a rather complicated aspiration. As such, she’ll probably try and pursue something in publishing upon leaving the cosy world of education.