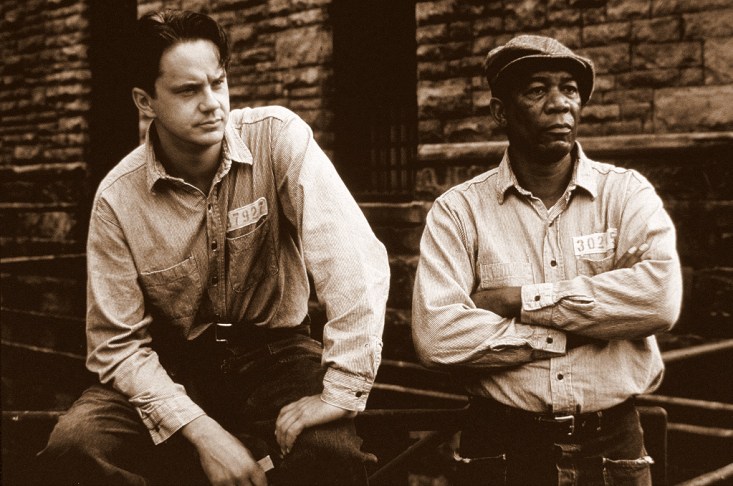 #stillshot features a frame from the moving pictures that grace our screens, and occasionally their promotional campaigns.  We want to spark discussion on the visual art of film, and the world it negotiates often within a single still. Also, ‘cause there’s some well purdy viz-art shots to be dissected out there. 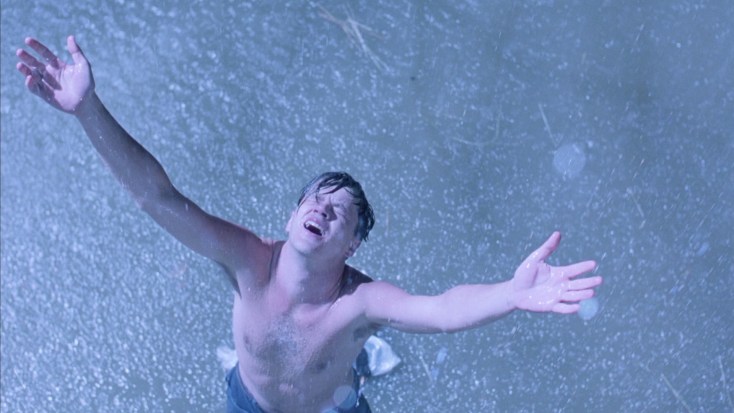 The Shawshank Redemption. Oh man. How do I even begin to express my love for this film?

I guess the best way to begin would be to recount how my love affair with Shawshank began. Young, childish and naïve, I sat down for family movie night without ever having heard of The Shawshank Redemption before. And whilst I had started to dip my skinny little toe into the pool of serious adult films by this point, I was still at that age where my tastes hadn’t quite matured yet. I was convinced that it was all going to be a bit dull, but my Mum persuaded me to give it a try.

I am now happy to say that I’ve never been more wrong about a film in my entire life, and I completely agree with the whole concept of ‘Mother Knows Best’. Quite frankly, she nailed it.

Shawshank opened my eyes in a way no movie had done before – in the space of one hundred and forty two minutes,  I had gone from laughing, to crying, to laughing again, to ugly sobbing and resignation, to yet more crying, to fist pumping and whooping with delight. I had never experienced anything like it, and quite frankly have never experienced anything like it since.

It’s easy to get cynical and poke holes in even the best movies as you get older, but when you’re young films of this quality come as a revelation. Shawshank confronted me with all the ugliness of human nature without any form of sugar coating, and I loved it.

The power of silent storytelling in this film is so profound, so intensely loaded with symbolism and meaning, that I found it very hard to choose only one frame from the film to focus on – honestly, I think anyone would. Brooks’ suicide, the Warden leering over Tommy’s dead body, the prisoners coming to a unified halt as the beautiful strains of The Marriage of Figaro float over the yard– all of these scenes are perfect examples of Frank Darabont’s prowess as a visionary filmmaker.

Darabont, who understands that sometimes words can never truly capture the thoughts, feelings and mood of a scene, frequently lets his visuals do the talking – which is just as well, because Darabont happens to be a master of visual storytelling.

The shot I’ve chosen is…well, only from the most iconic scene of the whole film, so no one gets any points for guessing. If you still haven’t figured it out 0r are yet to watch the film, I am talking about the scene in which our beloved protagonist, Andy Dufresne, makes his daring escape from Shawshank prison.

Oh Andy. Darling, sweet, mild-mannered Andy. How horribly you were wronged. This is a man who has been falsely accused of murder, brutally beaten within an inch of his life, repeatedly raped, humiliated, mentally tortured and blackmailed by the corrupt men he’s forced to dutifully serve. And he has endured all this, knowing full well that he is innocent, for over twenty years. To put it bluntly, he’s been through some tough shit.

So when we see him wade through a literal river of shit (ah, symbolism!) and make it through to the other side, we can’t help but cry tears of joy for him. Throughout everything Andy has managed to hold on to his hope, and it this hope that sets him free.

This leads me on to my chosen screenshot, in which we see Andy standing in the middle of the storm as a free man, lifting his face to the heavens as he quite literally soaks up the world around him. It’s a pretty dramatic and uplifting scene (on my first viewing there was lots of clapping and cheering in the Christie household, and maybe even a few spilt Pringles), and it’s effect is made all the more potent by the way Darabont chooses to film it.

Every single artistic aspect of this shot has been engineered to express Andy’s feelings, as well as to symbolise his spiritual and emotional catharsis.

I mean just look at the guy’s face – even thinking about it makes my bottom lip wobble. The Andy in this shot is so radically different from the Andy we see sitting in the shadows of his murky, lonesome cell prior to the escape. Gone is the greying, downtrodden man we have grown used to, and in his stead we are reunited with the young Andy – if you look closely, there’s not an obvious grey hair in sight. This Andy has an expression of pure joy and elation on his face, which is again a profound contrast from the stoic mask he adopted in prison.

The message is clear – only when Andy is free from the prison walls can he be himself again. This is further reinforced by the fact that Andy strips off his shirt – by discarding his prison clothes and all traces of his life there, he is finally shedding his prison identity. With his face and arms held up to the sky, Darabont makes Andy a Christ-like figure – his escape is nothing short of miraculous, and so Andy adopts the pose of a miracle worker.

Even more symbolic is the weather. Andy’s decision to stand in the middle of the storm shows how much stronger he has become through his experiences in the prison – he has weathered all the metaphorical storms that have come his way, and now he can stand tall and unafraid in the face of whatever adversity he is faced with in the future.

The rain that washes over him is also symbolic of his physical, spiritual and emotional cleansing, which acts as a form of redemption – although we know that Andy is innocent of murder, he still feels responsible for his wife’s death (hence his initial acceptance of prison life). Therefore, the rain could be interpreted as Andy finally letting all of his guilt wash away in order to move onwards with his life as a free man.

This deluge of water paints a stark contrast with the dry, dusty world the prisoners of Shawshank inhabit, and Darabont uses this to show how freedom can symbolically bring you back to life – water brings life in a drought, and as if by magic the rain brings the old Andy back to life again.

All this symbolism and more, Darabont manages to cram into one single shot. Quite frankly, it is visual storytelling at its finest. The young me knew it then, all those years ago, and the twenty year old me knows it now. I can still remember the way my heart swelled with happiness as I watched Andy running through the rain, the way that Thomas Newman’s inimitable score soared in the background and heightened every emotion I was feeling. It is a remarkable scene, made even more remarkable by its artistic direction.

Truly, The Shawshank Redemption is a masterpiece, and I will never understand why it failed to perform well at the box office. Nor will I ever be able to comprehend its failure to win a single Academy Award, despite being nominated in seven categories. Perhaps this lack of justice is oddly fitting, given that the themes of injustice and corruption are central to the film’s plot, but it still feels like a robbery when one considers just how much artistry and thought went in to every frame of the film.

In the end, though, awards don’t matter – films aren’t remembered by audiences for the number of accolades they receive, but for the way they make people feel. And for me, The Shawshank Redemption has an emotive visual power that has seldom been matched.

Yes, I’m probably very biased – but no one can deny that it takes a very special kind of film to make us want to simultaneously laugh, cry and ecstatically punch the air with just one shot. In this single, shining moment (and without a word being uttered), we see all of Andy’s fears and agonies melt away, and as he spreads out his arms with unspeakable joy, we as an audience feel compelled to do the same.

With one frame Darabont manages to communicate everything that Andy is thinking and feeling, whilst also capturing the indomitable power of the human spirit in a way that cannot be verbally expressed or defined. And that, for me, is what cinema is all about.

Melanie Christie is the Deputy Editor of FILM, THEATRE & TV at PTL. She uses this fact as an excuse to devote her life to Netflix. When Mel actually leaves her flat, she studies English Literature and History chez Edinburgh. She enjoys long walks, good company, and has a profound weakness for chocolate, tea and coffee. Ply her with any of these things, and you will buy her friendship.

If you’re interested in getting involved with PTL – drop us an email on prancingthroughlife@live.com