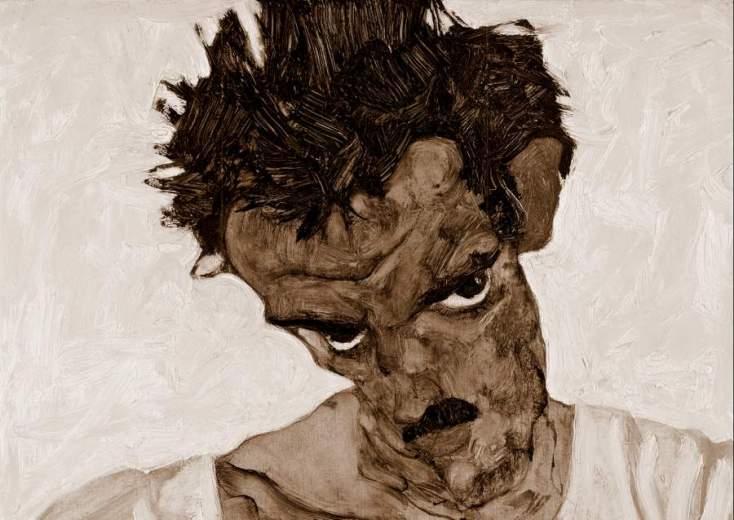 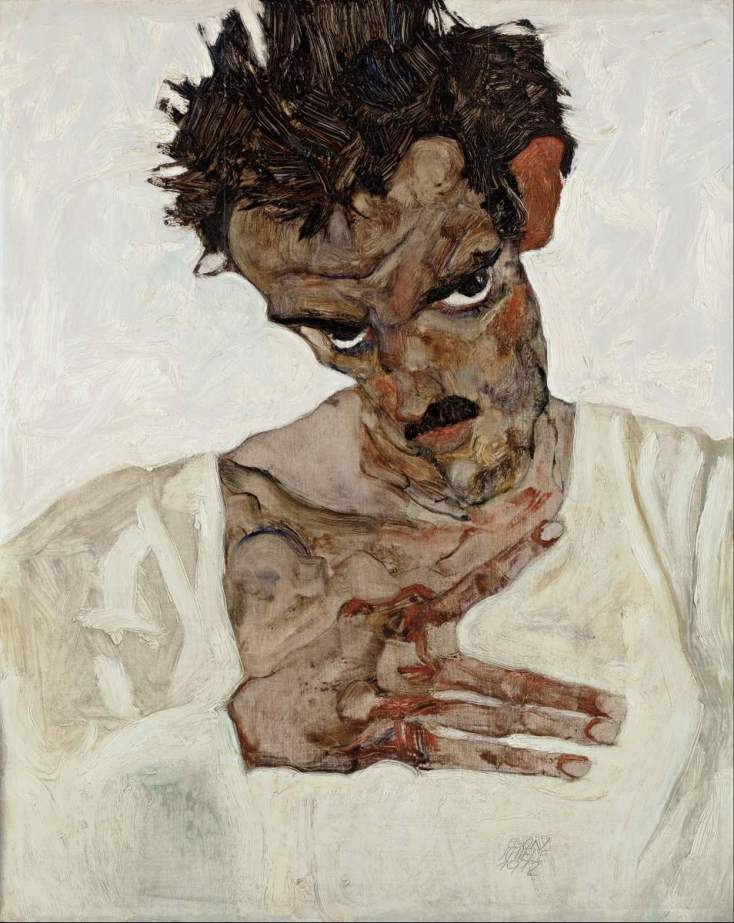 If alone in another world, I would take comfort in a portrait, perhaps if only to retain a level of sanity; you can maintain knowledge of humanity even if you start to doubt your own existence.

Looking at Egon Schiele’s Self Portrait with Lowered Head (1912), I am not sure the first words that come to mind would be anything related to comfort or reassurance. In fact, the painting is distinctly unsettling, but this is what I like about it; I will try to explain.

I first saw Schiele’s self portrait in the Leopold Museum in Vienna, during an interrailing trip around Europe. My first reaction, as I have suggested, was to feel uncomfortable. The amount of pain that the painting exudes is extraordinary. It hits you immediately. The twisted figure is contorted with agony – he seems to be riddled with tragedy and suffering. Despite this torment, or perhaps as a result if it, there is a certain hypnotic quality to the figure. His pointed finger and the intense eye contact he exchanges with the viewer draw you in.

I became even more intrigued when I learned that Schiele died when he was only 28, and completed this portrait at the age of 22. The close proximity to the age I am now really alarmed me – despite the similarity, it is so clear from this self portrait that Schiele had experienced things that I could not even begin to imagine. It made me think about the fact that we could be so close in age, and yet circumstance and epoch dictate that our lives are so utterly different.

After leaving the Leopold Museum, and having seen other extraordinary works by artists such as Klimt and Degas, it was this painting that ultimately stuck in my mind. Not only because of the reflection on my age, but also because I have come to see it as a vehicle through which to put my life in perspective. This painting reminds me that pain and tragedy exist transcendentally, and whatever isolation one may be feeling, the human condition necessarily dictates that you are never alone in your emotions.

Lucinda manning has just finished her a levels. Already worrying about finding a job. Probably needs to chill out.

If you’re interested in getting involved in PTL – drop us a message on prancingthroughlife@live.com.