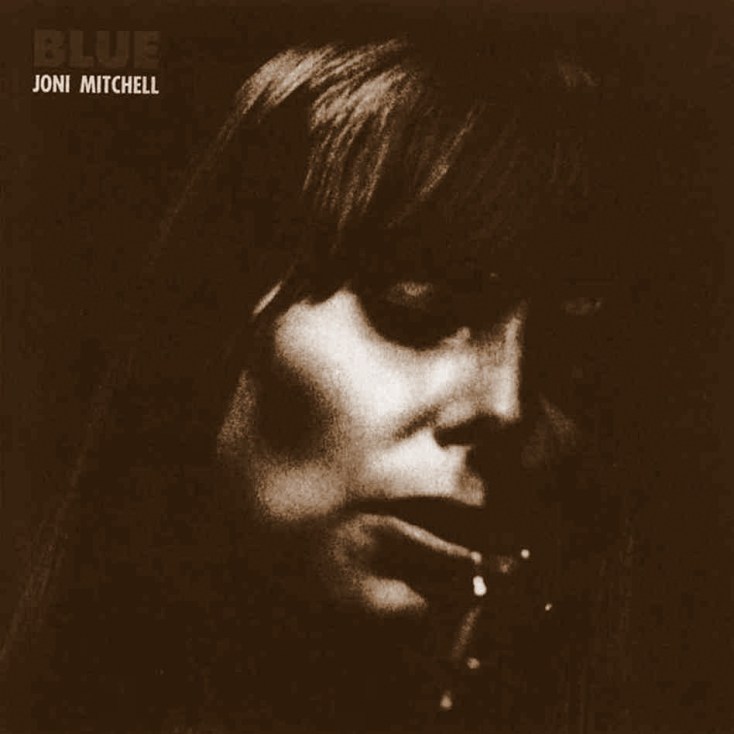 Blue came to me just when I needed it. It’s uncanny how, especially during adolescence, an important album, song, film or book in your life can seem to arrive at a crucial moment, as if ready for you and only you. It takes the place of something you were lacking, offers a kind of succour – and then proceeds to alter your way of thinking and outlook on life. Maybe, remembering its impact, you can’t see how you would ever have lived as yourself, the person you are today, without it.

Blue, released in 1971, is an album unanimously regarded by critics and listeners as ‘seminal’ and I believe one of Joni Mitchell’s best – but, more importantly, it’s a seminal event in the lives of many, including my own. 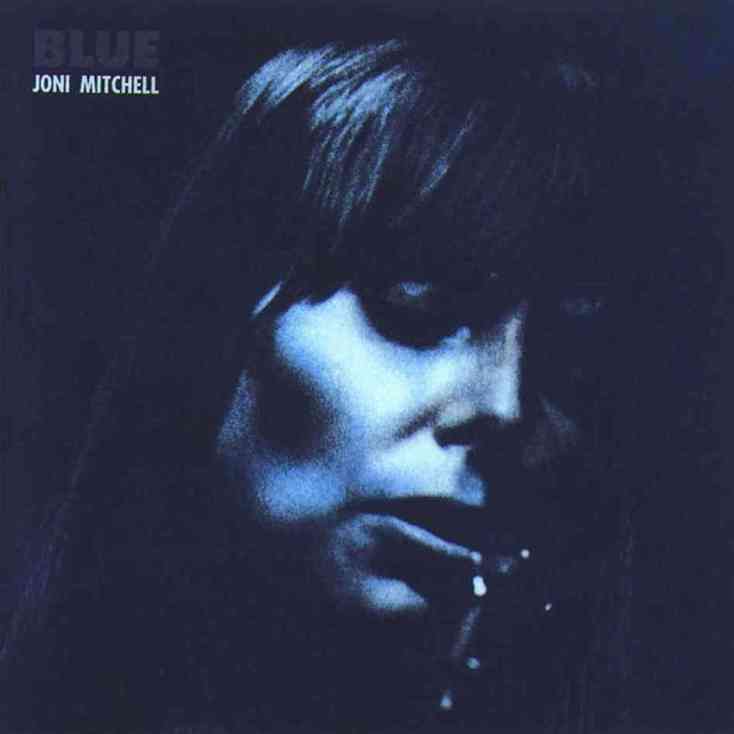 I don’t feel as if the autobiographical details behind the songs on Blue are that significant. At least not for me. I have not endured Mitchell’s heartbreak. However, Blue is not just an album just of lost love but one which covers life as a whole. Mitchell writes about joy, sadness, nostalgia, frustration – she said that:

‘Blue had been all I could write at the time. As a result it’s pure and empowered, and there’s no artifice in it. I was stripped naked, you know?’

What also strikes me about Blue is that in identifying with Mitchell on it, I don’t so much project my feelings onto hers, but am allowed by virtue of her writing and lack of autobiography to listen to her songs and automatically have my own thoughts, feelings and memories rise to the surface in tandem with her own, not matching in the event, but the emotion. 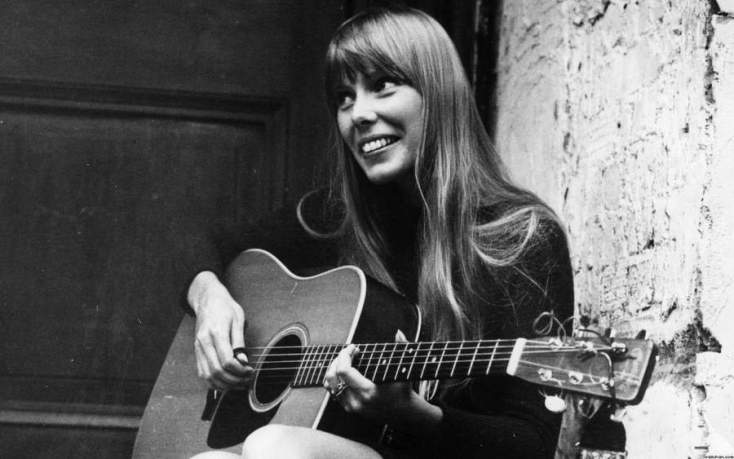 When I think of Blue’s significance in my life, I have to go back to the past and think of what it meant to me at sixteen – and since, because I’ve heard each song so many times that when I revisit them I also revisit memories of listening, and the memories which made me listen in the first place. Mitchell’s songs are covered with their own layers of meaning and with the ones that I’ve added to them, flicking over one another like pages in the wind as I move through the album. Each song is like a record of my growth, a relic of past experience.

When I listen to All I Want, my favourite song on Blue, I think of the first time I heard it. I was intensely worried about the future, as perhaps only sixteen year olds who have very little prospect of immediate, serious peril can be. I was worried about living and what that even meant – I had a hard time figuring out if I did everything I did because I wanted to, or because it was somehow expected of me – sometimes I couldn’t tell the difference, and that worried me and made me wonder how autonomous I actually was. I felt I had to fight through walls of prescribed meaning or convention to get at something that was true, that meant something to me:

Those words did. To have heard them being spoken to me, voicing my uncertainty and my desire to just live well, without any kind of baggage, was, at the time weirdly numinous. That Mitchell was expressing what I was feeling, and being so strong and open about it, was incredible to me.

As I’ve grown older and continued to listen to Blue, the more it made sense to me not only as a naïve, anxious teenager, but as a young woman. Whenever I think of Joni Mitchell, I think of Joan Didion, Susan Sontag,  Virginia Woolf,  women whose disembodied, potent voices have come to me through their words, layered with memory, experience and vision, and unwittingly taught me about the world, about being a woman. 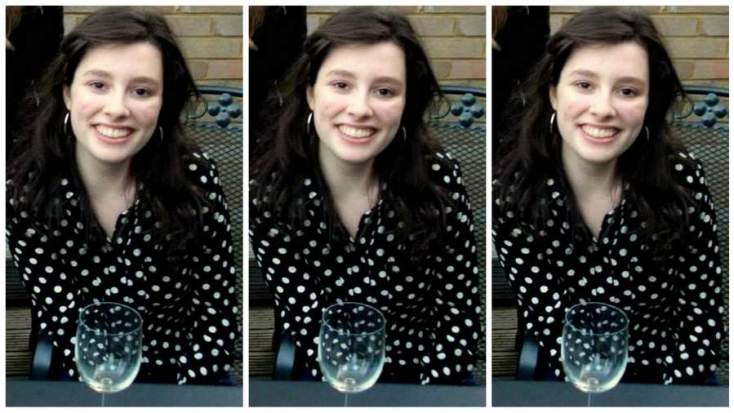 Sometimes I used to be anxious that my adolescence was being moulded too much by these female voices, that they encouraged an excess of solitude, introspection and self-sufficiency. Instead of connecting me with the world and helping me make sense of it, I feared I was becoming out of touch with reality and focusing too little on the actual people and events in my life. And I didn’t want to become sucked in by vague ideas or detached ways of learning ‘how to live’, instead of applying what I’d gained from  the likes of Blue, to my actual life.

However, Blue is an album which is truly part of life – both Mitchell’s and mine. Not only is my memory of the songs a living record of my late adolescence, it is also music which simply allows me to be present, to be in another world which is still the same one I live in: for instance, in listening to another’s pain, I am purged of my own. This is evident in River, in which Mitchell’s voice crescendos almost dramatically, sweeping from quiet vulnerability to soaring power and back again on the lines:

I feel everything she feels, because everything works in harmony – her voice, lyrics and the spare, striking accompaniment of the music. On most tracks, only a piano, guitar and Appalachian dulcimer are played, lending a beautiful cohesion to the whole album as the variety lies in the melodies, the lyrics and Mitchell’s voice, rather than in the use of many different instruments. It all contributes to the creation of an exact moment of pain, or of pleasure.

Just listen to this 1970 live rendition of California.

Blue is without doubt a mysterious, subtle album. I think of its cover, which for me symbolizes the album’s dual nature of enigma and intimacy. We see Mitchell’s face, as if we’ve caught her in a private moment of painful introspection, which is still the focal point of the cover, there in the centre for anyone to see: but it’s all dyed dark blue, and her face is in shadow; we can’t fully make it out.

Blue lets anyone form their own impressions, while remaining intensely personal both on Mitchell’s terms, and on your own. An individual listener’s relationship with it will never be the same as anyone else’s; I can’t tell you how to feel about an album which wears its intimacy on its sleeve and invites you to do the same – you need to listen to Blue for yourself and find your Blue & I.

Charlotte Palmer studies English at UCL. She enjoys sunny days and good conversation. When she grows up she wants to have a room in her house that she can justifiably call ‘The Library’.