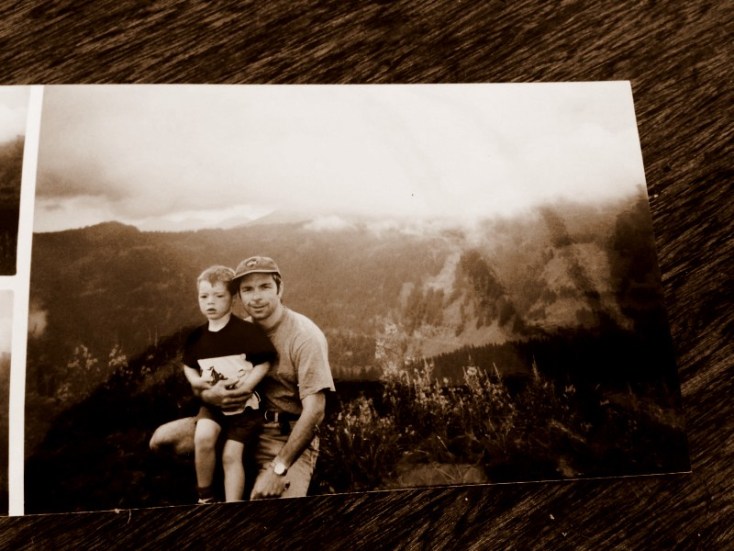 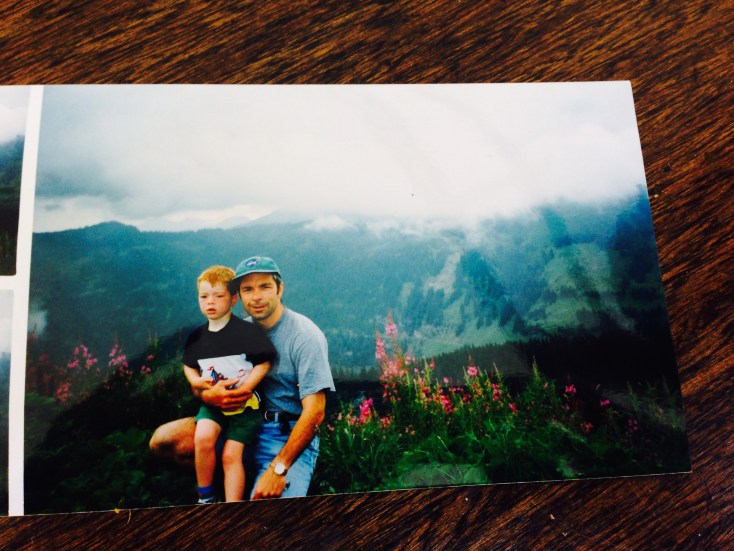 This is me and my dad.This photo is from a family holiday to Morzine in the French alps.

My mum, my dad, my brother and I spent several summers there. We used to drive there each year (and go through the channel tunnel which was the most exciting thing ever because you were UNDER THE FUCKING OCEAN). We stayed in the same chalet with red shutters and checked table cloths and we even stayed in the same motel in some tiny town when we ‘broke the journey’ on the way there and back. Morzine’s a really popular ski resort now and I’ve been back there since in the winter and it was very different to how I remember.

We used to call the purple flowers you can see ‘pop-y plants’ because their seed pods split open and curl outwards when dry and hundreds of cottony seeds would float out on the wind. I would try and accelerate this process by squeezing pods of the flowers I gathered with my little fingers and blowing on them to make clouds of downy fluff that would stick to all my clothes.

I have many fond memories of Morzine. Going on walks, finding tiny frogs no bigger than my fingernails, the sound of cowbells, the smell of pine trees and goat shit, picking wild blueberries, of the very traditional, alpine buildings and décor, and of the really scary slide in the outdoor swimming pools in the middle of town (that I would only go down if my dad came with me).

I was probably about 5 when this was taken and what strikes me first is the way I look: Putting aside my sterling fashion choices and – yes – I was indeed a very ginger child, I am tiny.

I was always the smallest in my class and you can see that, in the photo, my legs are smaller than my dad’s wrists. When I was six we found out that this was because I was coeliac, anaemic, chonically vitamin deficient and had acute appendicitis. I was, essentially, as undernourished as children shown on charity relief adverts. I had very little energy and, as this photograph stands testament, I cried a lot. It seems that, in most of my childhood photographs I have either just been crying, am about to cry, or am in flood of tears.

I was so fragile and my dad was so important to me then. I really needed him. He was the one who would always take me to school and, later on when everyone realised how sick I was, he was the one that sat with me in hospital and bought me Pokémon cards to make everything alright.

I think he looks much younger and more handsome here but over the years he has lost lots of weight (and hair) and has come to be far shorter than I now am. We have quite a different relationship now but this is the time when he was everything in the world that kept me safe.

Jack Alexander is a Sustainable Development student at the University of Edinburgh. He runs a book crew. Jack is from the fabulous land of Croydon but considers himself more suited to the land of the Burgh. His main interests lie in grooming his moustache and Beyoncé. This highly edited Beyoncé logo sums up Jack rather neatly: SHAME.