The NME has long been irksome to me. For a magazine entitled the ‘New Musical Express’ the fact that, in the last year, it has featured such exciting young artists as Ozzy Osbourne, the Pixies, Bobby Gillespie and the Who, has always struck me as indicative of their annoying and anachronistic devotion to guitar music above all else, displaying an instinctive snobbery against anyone they regard as too ‘popular’.

Last month they featured a front cover entitled ‘1994: The Year That Changed Music’. Such a statement provides a revealing insight into the magazine and its readership. Frankly, the NME peaked in the Britpop years, and since then its readership has aged with its taste. Do 15 year olds rush to pick up the NME in order to find the latest and hottest new music, or interviews with their favourite band? The fact they don’t cover One Direction or The 1975 in their pages, and a decline in circulation from 70,000 weekly sales in 2003 to under 20,000 in 2013 implies very much not.

All that is wrong with this publication was demonstrated to me most clearly on the night of Wednesday 26th February as I settled down, out of curiosity, to watch the livestream of the 2014 NME Awards.

Everything about the NME Awards desperately screams ‘LOOK HOW ALTERNATIVE AND REBELLIOUS WE ARE’. The awards themselves are in the shape of fists with raised middle fingers (lol, swearing), people wander onto stage clutching bottles of beer (lol, drunkenness), no one has to wear a suit (oooh, leather jackets, soooo indie) and they have a ‘villain of the year’ award which for the second time in a row has now gone to Harry Styles. (Guys, we get you’re jealous of his wealth and the amount of sex he gets but have you listened to tracks like Best Song Ever, Diana or Midnight Memories? So guitary. These days One Direction are essentially the biggest rock band on the planet, you should embrace them.) These awards are continually anxious to define themselves in opposition to the apparent corporatism and commercialism of the Brit Awards. The NME Awards are the home of ‘real’ music supposedly, compared to the manufactured rubbish at the Brits.

But, as I sat watching the TWO AND A HALF HOURS of Wednesday night’s ceremony, I was struck continually by the astounding hypocrisy of the ‘alternative’ air the NME want to project, and how much of this ceremony was similar to last week’s Brits.

Instantly shooting down any attempt to appear uncorporate, in the opening address the editor of the NME made sure, within his first few sentences to thank the sponsors of the event. Throughout the night the NME Twitter feed retweeted the official Windows Phone account, who were providing the photography for the evening. Dominos pizza supplied the food, which I think is supposed to be funny, and the city of Austin, Texas sponsored the whole event (how can a city be a sponsor?!) and was mentioned every few minutes. If they wanted to appear like they were some sort of independent, punk-spirited event, the Awards certainly failed to do that.

In terms of the award winners, the Arctic Monkeys were the big winners of the night. They picked up, among others, the awards for Best Group and Best Album. Interestingly, they won exactly the same two awards at the Brits last week. The winners of best track, Disclosure, had similarly been nominated in the same category for the same song at the Brits. The only notable moment really came when Lily Allen beat David Bowie for the award for best solo artist, the award he HAD won at the Brits. That’s correct, I didn’t get that the wrong way round, the Brits honoured Bowie and the NME Lily Allen. Who’s the alternative one now guys?

On the topic of Lily Allen, the attendees at the event were hardly the biggest hipsters one could imagine. Lily was there, as was Peaches Geldof, Abbey Clancy, Peter Crouch, the original members of the Sugababes and Diana Vickers turned up at the afterparty too. Quite the roster of indie stars, it’s like bloody Camden in 2005 eh?

People spent a lot of time this and last year complaining that the Brits had invented a ‘Global Success’ award just to get One Direction to come along. Well, the NME aren’t above doing the same as a mysterious ‘Songwriters’ Songwriter’ gong appeared for the first time this year, presented to the man the nation is loving less and less with each awkward appearance, Paul McCartney. This award appears to have to replaced essentially the only good award in recent years, the Dancefloor Anthem, which in previous years has been won by people such as Katy B, Calvin Harris and La Roux. Still, worth it to see Maccer’s increasingly immobile face eh guys?

A key criticism levelled at the Brit Awards is that most of the people there aren’t remotely interested in the awards or the music, they’re just there to have a good time. Well, it seems at the NMEs the exact same problem occurs, as noted by two different people during the night. Zane Lowe, before he presented an award, noted that among the industry and artist area, everyone was just ‘drinking and talking’ throughout, while Lily Allen noted to the editor of NME before giving out the Godlike Genius Award that the crowd ‘aren’t listening’.

So, what ARE the differences between the NMEs and Brits? The main thing really is you’re less likely to win anything if you’re a woman or black at the NMEs. And what did I learn watching the ceremony? Well, indie boys now no longer have the short back and sides, long on top look they did in 2011, now they’ve all got long greasy 90s style curtains. Which is AWFUL news for anyone who once found skinny pale indie boys quite attractive. And also that if you are a rockstar worried that you are musically irrelevant these days, you can still get a job presenting an award, as we saw when Carl Barat shambled onstage to give out a gong. 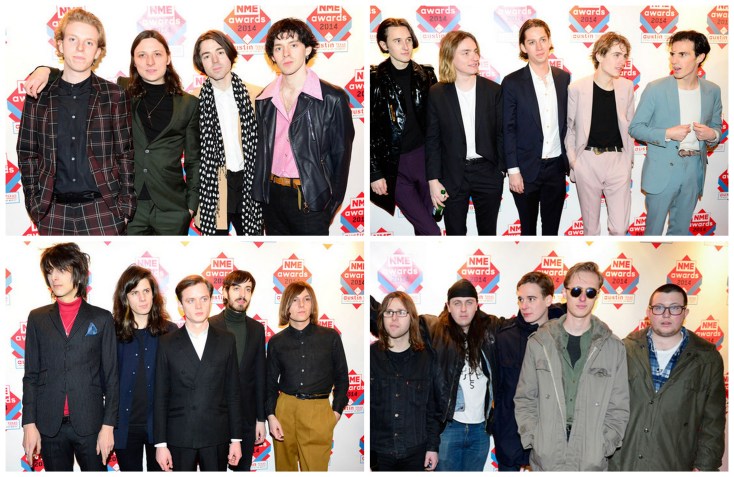 Who are these people? Anyone?

I think the whole event was summarised best during the underwhelming performance of Belle and Sebastian (last album straight into the charts at number 44) when a stage invasion took place by a middle aged bearded fat man with long hair and a faded band t-shirt on. NME, that man is your readership now. Look on him and weep, for as long as you keep putting bloody Paul Weller on your front cover, that fat man is your future.

Nick Cordingly is the Deputy Editor of MUSIC at PTL. He was recently dragged kicking and screaming out of the Cambridge bubble and is now in the enviable position of trying to find a use for a history degree when all he wants to do is listen to pop music and tweet. Nick also has a tumblr called ‘Sounds & Thoughts’ which he should update more regularly.