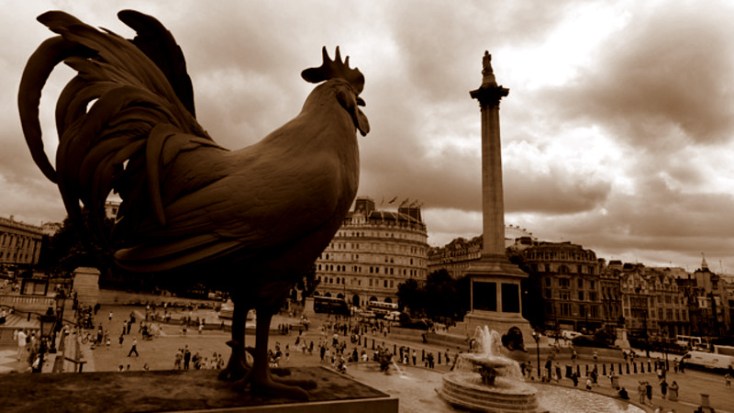 Since 1998, the fourth plinth framing Trafalgar Square has been involved with the commissioning of sculptural works designed to engage and inspire the public. The artworks, changed annually, act in part as a sort of visual relief – they can be observed without having to step in to the National Gallery, or other such institutions. The ‘street art’ element of the project openly invites those who wouldn’t necessarily come across fine art, to interact with it. By placing it in a central and popular location, London can declare its artistic and cultural authority to the rest of the world. So, is the fourth plinth simply a way for everyone’s favourite blonde (good old Boris) to show-off a bit? Or, does it aim to involve those who often find art pretty inaccessible? 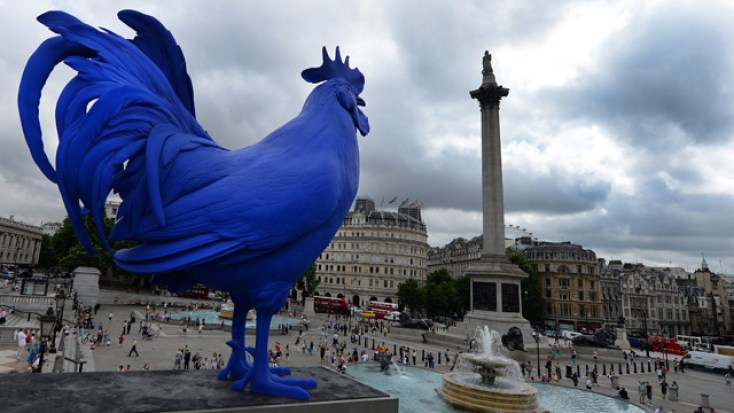 Trafalgar Square and its fourth plinth are currently occupied by a big, blue cock. (Ahem. Cockerel.)

Its creator, Katharina Fritsch, has incorporated some appreciated humorous elements to her work: the double entendre, which can’t help but trigger a snigger or two, and the ironic placement of the French national symbol in the shadow of Nelson celebrating his infamous victory over Napoleon (apparently unintentional, pah).

However, Fritsch’s vast and striking artwork’s time is coming to an end. It has recently been announced that Han Haacke’s Gift Horse is due to take its place in 2015. Its wry echo of the equestrian statue of William IV, which was originally intended for the plinth, takes inspiration from seventeenth century artist George Stubbs’ etching – despite the fact it resembles the stuff of nightmares. Haacke gives a nod to the historic prowess of British art with this tribute. Its bronze, skeletal frame continues his exploration in to the relationship between art, power and money. Tied to the leg of the riderless horse are live updates of the London Stock Exchange, highlighting the sculptor’s agenda; Haacke chooses to pass comment on the role of money within the art world and how it has played a vital role throughout history, whether for good or for bad.

Quite simply, the cockerel has been fun to have around. Art doesn’t have to conform to certain labels or become an elitist subject matter; art is, and should continue to be, for everyone. The fourth plinth appears to attempt to encourage the appreciation for fine art by placing it in a very public setting and getting a reaction from people; yet its position in front of the National Gallery possibly indicates that those who view it are intending to visit the galleries anyway. So does it really expose fine art to a wider audience? The more people are encouraged to discuss and interact with the piece, surely, the more successful it’s been.  Yet is Haacke’s work likely to provoke a similar reaction? And how about David Shrigley’s massive thumbs up, Really Good, which follows in 2016?

So, what is it about Haacke and Shrigley’s pieces that effectively fought of the rest of the competition? Both these sculptures are pretty relatable and relevant to issues brought up today; perhaps more so than the four vetoed works. Shrigley’s thumbs up contains that comic element, seen in Fritsch’s piece, which is likely to cause a positive reaction. Any art work that puts a smile on someone’s face is going to go down well. In contrast, Haacke’s work could be deemed as conforming to an elitist nature with its underlying political arguments and high art elements. However, it serves well as a tribute and reference to our history and the consistently current issue of money and the influence it holds.

Whilst the satirical element and historical aspects to Gift Horse adds to its influence as a piece of art, I’m doubtful of its ability to relate to the masses – I suppose all will be revealed come next year.

Bridget is a first year History of Art student at UCL who takes particular interest in Northern European and Italian Renaissance art. She can’t eat oranges in public (which we can totally understand, the bits ALWAYS get in your teeth, don’t they?) but believes tea can cure everything, especially if there’s a chocolate digestive close-at-hand for dunking.